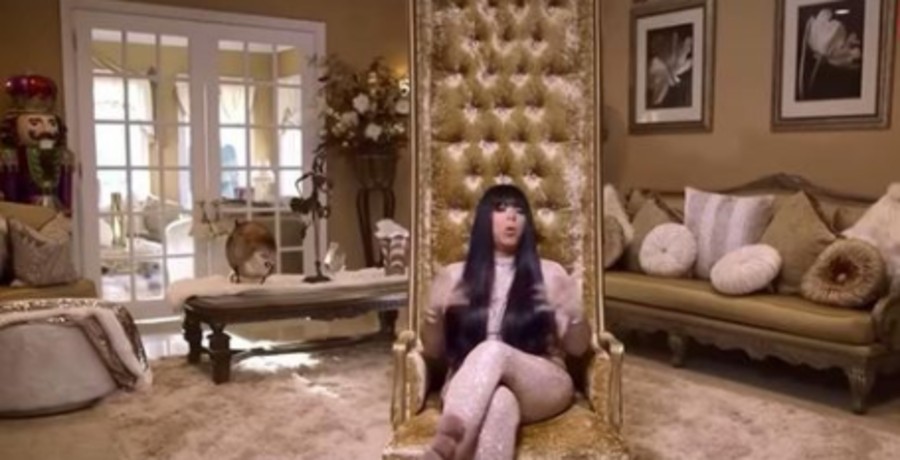 Jen Martone is the quintessential mama bear. You don’t come for her daughter. Several people had tweeted that Bria was selfish and called her some other choice words. The premiere episode of Unpolished showed her and the girls dealing with the sudden passing of Big Mike. They also were in the middle of planning Bria’s wedding, a sore subject for Lexi Martone.

Things came to a head when Jen tried to discuss money with the girls and Lexi suggested postponing the wedding. To each and every one of the comments, Jen replied. She is an active Twitter user and thanks everyone for being supportive. On her Instagram it seems Jen has had enough. She said she wasn’t sure everyone saw the bigger picture.

Jen Martone Said To Back Off

Jen Martone said the worst thing that could have happened to her daughter Bria Mancuso was losing her father four months before her wedding. She wanted people to take it easy on her because she was in pain. They’d planned the wedding for her for the past two years. Jen said Bria put her first – when Mike passed, she was there for her.

One fan said, “So sad about Big Mike, but Bria is a selfish-brat, she wants a 100k wedding that they can’t afford… she is living in a dream. All for that cheat-ass junkie boyfriend.” Jen responded, “take it easy with the name-calling. It’s called recovery. And big Mike would want me to put the kids first!” Some fans expressed concern for Jen. It was clear she’d become overwhelmed handling everything on her own. 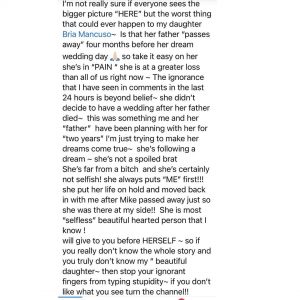 She Spoke About Her Daughter Being Selfless

Jen said Bria is, “the most beautiful hearted person that I know.” Martone said if you don’t know the whole story, “keep your ignorant fingers from typing stupidly.” She ended the post, with, “if you don’t like what you see turn the channel.”

When someone tweeted, “Cause Matt doesn’t pay for anything ever and hates when they bring up his unemployment but uhhhhh seems to love the money.” Jen said, “Matthew’s unemployed? Matthew has an amazing job and we’re all trying our best to give these kids the wedding of their dreams. Something that big Mike started with them.”

Some fans praised Jen Martone’s post. One said, ” thought the same thing, Bria is still in pain and grieving over the loss of Big Mike….her loss just came across as anger.” Another sympathized, “as a New York bride who’s wedding was also affected by Covid, I completely understand where Bria was coming from.”

What do you think of Jen defending her daughter so relentlessly? Are you excited to see Bria’s wedding come to fruition? Comment below with your thoughts.