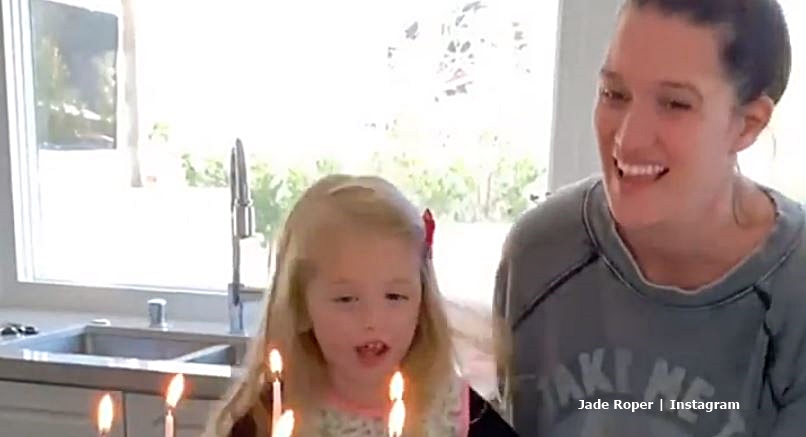 Jade Roper and Tanner Tolbert are now the proud parents of three gorgeous kids. Emmy, born three years ago, soon became a big sister to Brooks. And more recently, to baby Reed Harrison. Reed arrived during a home waterbirth birth. And Bachelor in Paradise fans probably recall that Brooks arrived in a huge hurry. But with three kids in diapers, it could be a nightmare. So, is Emmy potty trained yet?

We reported that Reed came a bit early, so Jade talked about him on his actual anticipated due date. Certainly, the little boy seemed more than welcome in the growing Tolbert family. And Jade said that somehow they can barely imagine what life was like before his arrival. Fans also love the adorable little boy born with a shock of dark hair like his dad. However, it might be pretty daunting dealing with three kids not yet potty trained.

Before Reed even became a thing, Jade Roper and Tanner Tolbert talked about more kids. ET reported that it came back in October 2019. The Bachelor in Paradise couple talked about Bachelorette Hannah Brown and Tyler Cameron. Plus, they mentioned Demi Burnett and where Tanner stood with her. But of interest, he mentioned the idea of another baby. Tanner joked, “We’ll see once one gets potty trained, then maybe we’ll open our minds to a third.”

The BiP alum took to her Instagram on January 13 and carried out a Q&A. Many questions came in from ABC fans. But she also talked about Emmy and her potty training. Jade mentioned that she never revealed the fact that Emmy went through “potty training” some time back. But she added that she didn’t think sharing it on Instagram was ideal at the time. And, she also told the fan she doesn’t reveal everything.

Jade Roper noted that fans also don’t see or hear about the “kids’ tantrums or big emotions.” Sometimes, Jade and Tanner just feel that some very personal things should remain private. And most fans of reality TV stars probably understand that. Nevertheless, fans at least see enough cute photos and videos to keep them thoroughly engrossed in those charming little children. 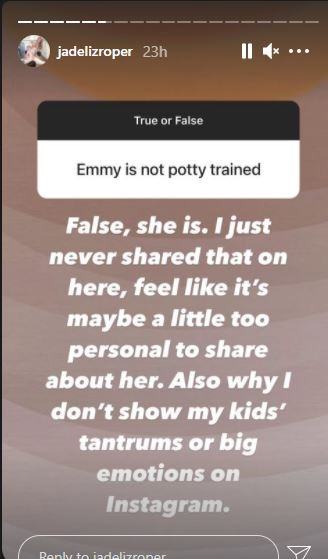 Recent posts by Jade of the kids

On January 13, the BiP mom shared a gorgeous photo of Reed. She celebrated the second month of his life. She captioned it with, “Happy 2 month old birthday, Reed!! I just melt over those tiny smirks and that mohawk of yours. 😍😍😍.” Of course, fans swooned and gushed over the sweet little man. Then the day before that, Jade Roper shared how Brooks and Emmy went to the park and collected some pretty fall leaves.

She hopes that they find a way to make some creative crafts with them. Finding time for the older kids must be so much easier for her with Emmy potty trained these days. Do you agree? Sound off in the comments below.