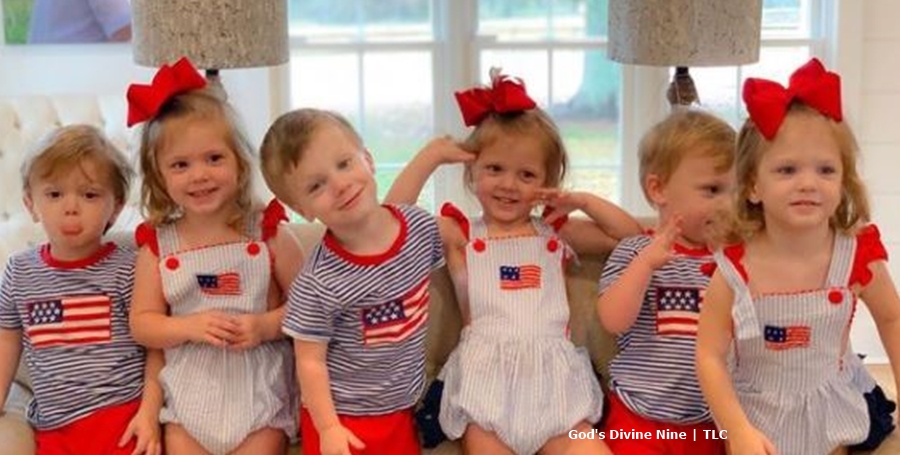 Sweet Home Sextuplets mom Courtney admits she’s no good at baking. But she tried it as the kids go through a “Big Bad Wolf” phase at the moment. And she seemed quite surprised that it worked out okay. Taking to her Instagram, the mom-of-nine asked her many TLC fans for ideas on sweet treats that the kids might enjoy. And some mouthwatering suggestions came in.

Courtney Waldrop might have wished she had some cake in the house a few days ago. We reported that when she needed to pick up the older boys, four of the six kids burned out in the lounge. Fast asleep, she despaired about that. And,  we reported that she might face a difficult time waking them without too much grumpiness. Perhaps something yummy might have helped them get over it.

Now Courtney took to Instagram and revealed the six little Sweet Home Sextuplets kids looking good as gold. They clustered around Courtney’s wolf cake admiringly. The TLC star wrote, “Ok so y’all know I cannot cook🙈 but thankfully I have friends that can😝.” Then, she explained, “The babies are on a “Big Bad Wolf kick right now..so we attempted to make a WOLF cake🤣. I actually thought it turned out pretty good😝 It tasted great and the Sextuplets had a blast so that’s all that matters!!”

Right at the bottom of her post, Courtney wrote, “Baking with the Sextuplets: Cookies✅ Cake✅ What’s Next?? Give me ideas🤗.” And her sweet hashtags revealed, “#bakingwithkids”: and “#bakingwithlove.” Okay, so it’s not the most realistic wolf cake fans ever saw. But the kids didn’t seem to mind. And many fans commended Courtney on her efforts. Plus, they sent in a lot of other ideas for sweet treats that she can bake at home.

Fans sent in ideas like “donuts,” “cupcakes,” “Rice Crispy treats,” and “brownies.” In her post, Courtney noted that she got a bit of help from “Emily and Stacy.” Emily responded and said, “That was so much fun! Messy, but fun! Love these babies❤️.” Actually, other fans wished they could also help out the Sweet Home Sextuplets family in the kitchen.  One follower wrote, “I would help u guys out with these 6 cuties in a heartbeat if I could. but unfortunately, that is NOT possible! 😩😂 Haha! I don’t think it’s possible for a fan to help a famous family out with their kids!”

More ideas went in like”dirt pies” and “banana pudding.” Can you think of any other fun treats Courtney could rustle up in the kitchen? Six hungry tummies might appreciate it. Sound off your thoughts in the comments below.