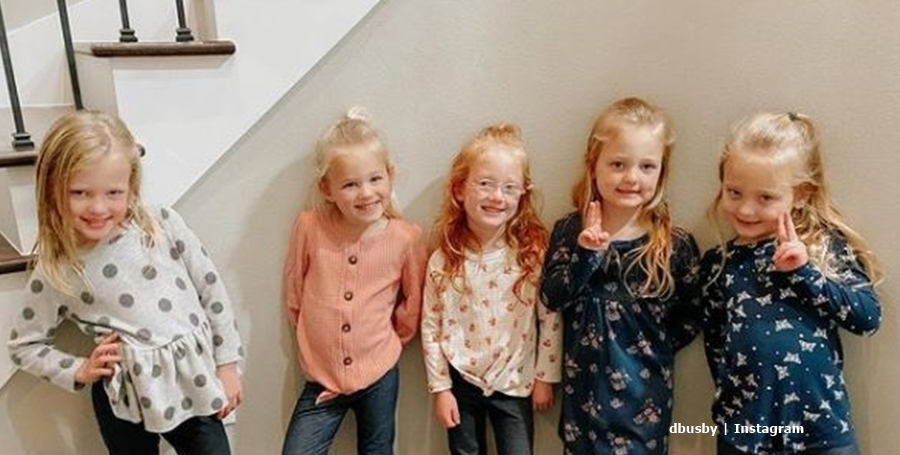 OutDaughtered quint Riley’s usually the first who puts up her hand for anything new. But as the girls currently get into dance mode, does she love ballet the most? Danielle Busby shared about the kids and their ballet lessons. TLC fans tried guessing who enjoyed learning it, and who really showed little interest. So, who hates it, and who thoroughly enjoy it?

OutDaughtered – quint who loves ballet more than all others

Before you take a guess about the quints and ballet, let’s take look back over the past week. Both Adam snd Danielle Bisby shared about the kids in dance mode. The first post by Adam revealed that Riley ended up visiting the ER. It came after she tried dancing in the bathroom. Not realizing the floor was wet, she slipped and banged the back of her head. So the doctor put in a staple to close the wound.

In the second post, OutDaughetered mom Danielle revealed Hazel and Parker dancing for her. They made up a special dance especially for her to watch. Very cute, they held hands during the dance. Then, they twirled and swirled very sweetly. Mind you, Danielle giggled quietly as she watched. When they finished,  she asked who made up the dance. And, Hazel pointed at quint Parker. Now the kids learn ballet, who might love it more than the others?

Danielle shared a photo of the kids in their ballet outfits

On January 13, Danielle took to her Instagram and shared a photo of the quints dressed for ballet. She wrote, “Some girls wanted to dance.”But some only “thought they wanted to dance.” Then, Danielle said that one of the quints said, “no way to dance 🤪.” Finally, she asked TJC fans, “can you guess who enjoyed it the most???” Well the one who decided that ballet isn’t for them, is probably Riley.

Major Clues: OutDaughtered quint Riley danced and ended up in the ER. So, that might have put her off. Secondly, Riley’s not even in the photo with the other kids. Perhaps the little girl went off and did something way more interesting like catching a lizard. Or, perhaps she went down and spent time with her dad in his photography workspace. So most fans guessed Riley wasn’t interested at all and said “that’s a no from me.”

Parker probably enjoyed ballet more than the others

In the comments section, fans guessed Parker enjoyed ballet the most. After all, her eyes were literally “shining,” one fan remarked. Plus, fans know that Parker shows a natural grace. And many of them thought for a long time that she might end up modeling or dancing. Plus, recall she invented the dance that she and Hazel did for Danielle.