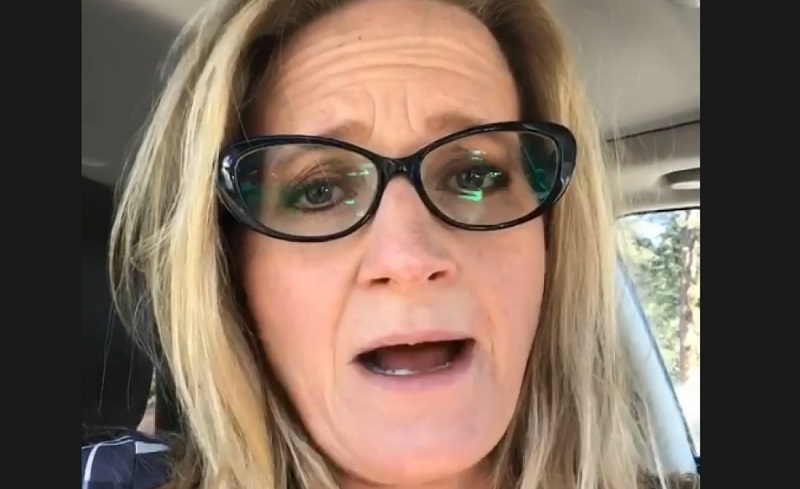 Sister Wives fans picked up on Christine Brown’s latest photo then they took off running with it when it comes to sharing their comments. Some fans seemed concerned about the third wife from the famous polygamous Sister Wives family featured on TLC. But others were rather brutal when commenting on Christine’s new look.

Christine Brown posted a new photo of herself, along with a sales pitch today. The fans started throwing digs at her for yet another promotional platform on social media. It looks like she’s coupled jewelry with her LuLaRoe clothing. The Sister Wives followers complain they’ve had enough of her using the fan base as captive customers.

They’re saturated with Kody Brown’s constant reminders of financial hardship throughout their time on TLC. What the Sister Wives adults say about money problems doesn’t coincide with what the fans see.

The family, including Christine, seem to live in the lap of luxury. They’re broke but one wife rented a mansion with an elevator. They’re having tough times, but a gathering at one of the Sister Wives houses leaves the driveway looking like a new car lot.

Each wife drives a new car with all the bells and whistles. Kody has a motorcycle and a convertible. His latest vehicle addition since landing in Flagstaff is a  pickup truck. So, the Sister Wives adults might say they’re struggling financially, but it sure doesn’t look that way.

What Did You Do To Yourself?

So, what did this Sister Wives lady do to herself to have so many followers ask the same question?  The photo below picked up a lot of comments from the Sister Wives followers who jumped in to ask what’s up with Christine Brown’s new look?

It doesn’t sound like too many people see this change as flattering for the mom of six. Her Sister Wives fans love the natural-looking Christine Brown they’re used to seeing. All her facial features look so exaggerated in the photo.

It’s unlike Christine’s fans to offer a negative comment. They’ve praised her all along for the weight she dropped. But today something looks very different. A few fans chimed-in to suggest she lose the filters she used in the photo above.

Some fans hope it’s just a PhotoShop effect and something that went away as soon as the camera clicked this shot. A few fans commented that her eyebrows look too drastic for her usual natural appearance.

First of all, if you take a good look at this photo, you see that Christine matches the silky drapes behind her. It looks as if her shirt is made out of very similar fabric. That alone takes away from the real Sister Wives look everyone knows so well.

Surprisingly enough, Christine left many of the not-so-nice comments up on her social media. At least she respects her fans enough to let them have their say. While the fans pull apart the way she looks in this photo, one fan made a really good suggestion.

Look at her post from five days ago (It’s the photo on the left with Christine in a sweater). That is the Christine they all know and love. So this change doesn’t appear permanent. The three photos above are recent Sister Wives photos of Christine Brown. So, she looks like herself in these pics.

It seems more like Christine experimented with some makeup and maybe even a brow stamp. But it seems safe to say the curtain-like shirt, bushier than usual brows, very red-red lipstick, and her hair in semi ringlets are not her best look. Or at least they’re not when worn all together. It appears the fans pointed that out for her.

Although one fan did say she looked absolutely beautiful, so everyone has different tastes. But most comments suggest that she lose the look.

But if you do go back and look at a recent picture from a few days ago, you realize Christine is still the same. Just maybe next time she won’t take such drastic measures for a quick makeover. Whether this came fresh out of editing or it’s the result of a makeup job, fans just don’t seem to like this look on Christine Brown today.

What do you think about Christine Brown’s new look? Let us know in the comment section below. Make sure to check back with TV Shows Ace for more Sister Wives news.