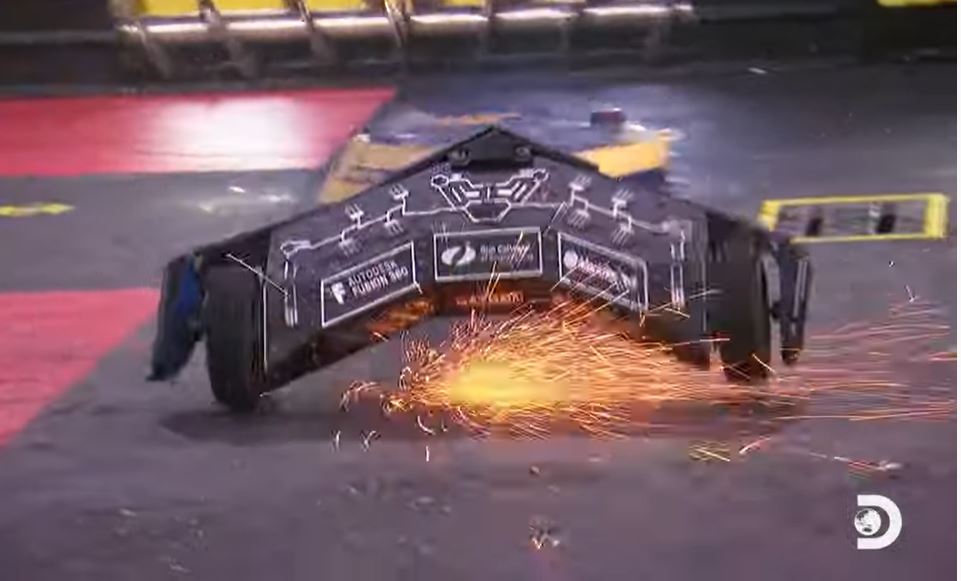 BattleBot mania is only on Discovery Channel. Thursday night is where it’s at as the next competition pits two popular builds against each other. It’s the Masshole ‘bot Valkyrie versus the Florida ‘bot Rotator in an epic BattleBots showdown

And with both constructed bots weighing in at 250 pounds, it’s a high energy match that will see sparks fly everywhere during the noisy round, as the BattleBox is where Valkyrie and Rotator square off in a deadly battle of horizontal spinners.

Also on the next episode we will see undefeated Malice and MadCatter duke it out while Uppercut takes on SawBlaze in a volatile main event.

Discovery sent TV Shows Ace an exclusive preview of Valkyrie and Rotator getting their match on.

The BattleBot contenders Valkyrie and Rotator

Their wiki page says: “[The year] 2019 marked the founding of Valkyrie’s Home for Orphaned Builders, a safe haven for lost New England bot builders wishing to feel like part of a team again.”

Rotator’s team are true ‘bot veterans with over 16 years of competitions under their tool belts.  Their sponsors include Stryker.

A fun fact is that Team Revolution has some folks who work for medial device manufacturer Stryker in Ft. Lauderdale, FL. Stryker is a leader in medical machinery for orthopedic surgery like hip replacement surgery.

Season 5, Rotator was largely unchanged for the most part, but had a few cosmetics like black lines down its wheelguards similar to circuitry patterns due to the wheel axle holder, little orange and orange LED lights positioned right next to the castor, and a remodeled disc spinner. Though most of the photos thus far have only shown Rotator with one disc, Victor Soto confirmed in an episode of “Tale of the Tape” that they do have the signature double disks.

Tune in to see if the relative newcomer Valkyrie sends Rotator to the operating room for a Stryker surgical procedure: