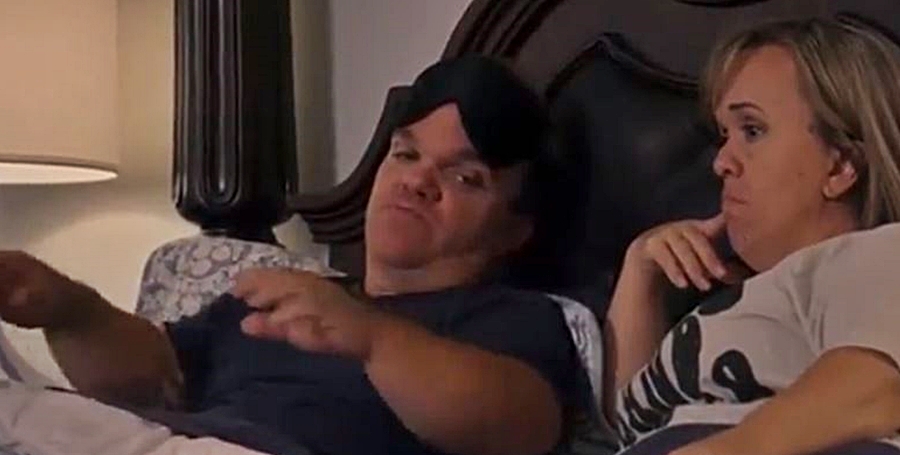 7 Little Johnstons fans become increasingly upset with the current season and some of them claim it’s no longer suitable for kids. While occasionally, TLC fans see the family doing things like cookouts and discussing Amber’s job, the rest of it is all about intimacy. And, fans become thoroughly disgusted with the show. Many of them no longer want to even see it on the network.

We reported at the end of December that in the new season, Trent and Amber “spice up” their intimate lives. They go off for pole dancing lessons, therapy about the bedroom, and erect a love shack out the back. The pole dancing didn’t seem too bad. But even then, fans started to complain that they don’t care for all this intimate talk. And, it extends to fans having to hear them talk about it in front of their kids.

We reported that briefly, the 7 Little Johnstons parents left the talk about the bedroom behind. But, only briefly, we warmed. Trent and Amber discussed their concerns about Amber teaching at school during the coronavirus. And, Trent mentioned that little people might be more likely to contract the virus. Meanwhile, Amber wondered about educating the kids about little people. Well, if any of them are fans, they certainly get an education on their initiate lives right now. And some parents have had enough.

Things are getting heated over here 🔥 Don't miss #7LittleJohnstons Tuesdays at 8/7c. pic.twitter.com/pqsDuYBhsn

Meaww noted that so far, fans saw Trent and Amber “indulged in couple yoga.” Plus, they “discussed role play.” Then, last week, they visited a “s*x counselor/therapist’s office to discuss what’s working and not working” in their love life. Plus, they went for those pole-dancing lessons. And then, they carried out some cosplay in the bedroom. Trent dressed up as batman and the lights went out…but everyone knew what went down. And fans really don’t want to see Amber rubbing Trent’s behind seductively.

One person on Twitter wrote, “I really don’t need to know about these people’s s*x life. I can’t be the only one. Other people’s sex lives really just aren’t that entertaining. Well, I guess they are for some people but there is a whole genre of entertainment just for that purpose.”

Meanwhile, on TLC’s Instagram account, one 7 Little Johnstons critic noted, “little or big-if my husband came out of the bathroom dressed as Batman, I would die of laughter. sparks are one thing in the bedroom, making a fool of a grown man on national tv-that’s a whole new low! 🤮🤮🤮🤮🤮.”

This comment also came in on TLC’s Instagram: “I absolutely hate this message they’re giving this season. It makes me physically ill to even picture this.”

Meanwhile, on the 7 Little Johnstons Instagram, one furious ex-fan wrote, “It’s a shame that I had to forbid my children to watch the program and stop watching them myself. I love them, we really love them but that effort to ventilate their intimate life does not make me feel comfortable. Intimate life is something private and sacred for each couple. It should not be aired with children and not with the public. It’s very disgusting. Hopefully, they will be family episodes again and leave your privacy for the bedroom.”

Others agreed, and several of them said they stopped watching the show and won’t go back again. One of them noted, “This season seems like they are reaching…. inappropriate for family viewing.”

Do you agree? Sound off in the comments below.