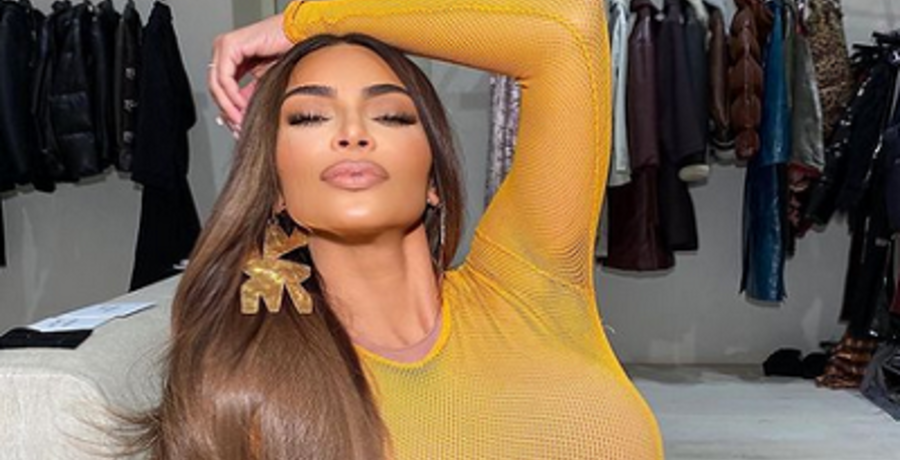 Kim Kardashian made her big return to Instagram. In case you haven’t heard the news, she has become the center of divorce rumors. Since then, the KUWTK star took a little break from social media. It’s unlike the queen of social media to not post on Instagram or Twitter. But Kim had to escape the plethora of divorce reports.

Over the weekend, Kim broke her brief silence to reveal that she’s attending Bible study with her sister, Kourtney Kardashian. The sisters even wore matching SKIMS half-zip sweatshirts. While her fans think her Instagram has become one big SKIMS advertisement, she continues to promote her shapewear line.

Kim Kardashian previously deleted those two SKIMS photos that TV Shows Ace showed you. But she’s back to posing in her shapewear without her wedding ring. The Keeping Up With the Kardashians star dropped her new line on Instagram. On Monday, January 11, Kim made her bit return to Instagram and shared the sexy photos with her 199 million followers.

In the first photo, Kim wore a black bralette with a matching thong. She finished off with semi-sheer tights. In the second photo, Kim showed off her bare ring finger as she posed in nude pantyhose and a matching bra. The 40-year-old wanted to focus on the launch of SKIMS’ latest hosiery collection.

“We’re changing the game and launching gravity-defying tights and hosiery solutions that sculpt, smooth and never lose their shape,” she wrote in the caption.

The new line drops on Thursday, January 14. The hosiery comes in four colors, four styles, and plenty of sizes. In her post, Kim encouraged her followers to sign up through SKIMS.com to get first dibs. On her Instagram Stories, Kim explained that she wanted the bralettes to be just as comfortable a the hosiery themselves.In one of the photos, she wore a diamond ring and a simple band. Though, it’s unclear whether it’s her ring from Kanye. Kim removed her wedding ring when she previously posed on the floor of her walk-in closet to debut her new SKIMS Body Basics line. She has since deleted the photos from her Instagram feed, but are still up on the SKIMS account.

Why she doesn’t always wear her wedding ring

Kim Kardashian doesn’t feel that she needs a wedding ring to show her commitment to Kanye. An insider told People that ever since the 2018 Paris Fashion Week theft, the reality star “has made many changes in her life.” The KKW Beauty founder doesn’t feel the need to wear “flashy” jewelry anymore.

“She is much more careful about being flashy,” the source said. “She doesn’t wear expensive jewelry every day, so it makes no sense to keep it at the house. Kim is trying to eliminate as many concerns as possible.”

Last week, it was reported that Kim is planning on ending her almost seven-year-marriage with Kanye “for her kids and her own sanity.” The couple is living their lives separately during this time. Kim remains in California with their four children, while Kanye is hiding out in Wyoming. However, the distance continues to put a damper on their marriage.