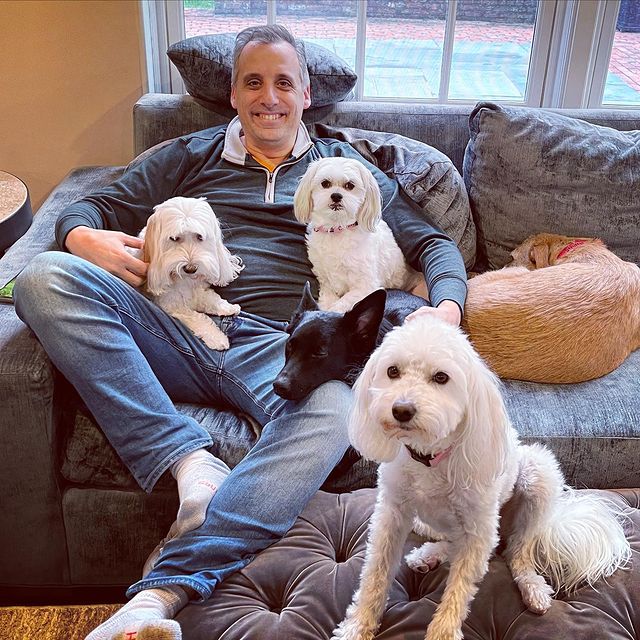 Joe Gatto is well known for his appearances on the comedy show Impractical Jokers. The show stars Gatto along with costars, Sal Vulcano, James Murray, and Brian Quinn. Four comedians and lifelong friends compete to embarrass each other out amongst the general public with a series of hilarious and outrageous dares. When Sal, Joe, Q, and Murr challenge each other to say or do something, they have to do it. And if they refuse, they lose. At the end of every episode, the biggest loser must endure a punishment of epic proportions.

Gatto is an accomplished comedian, actor, and producer. Along with appearing on Impractical Jokers, Gatto has also starred on the comedy gameshow The Misery Index where the four friends compete by comparing hilarious events from their lives.

Whether you call him a comedian or “impractical joker”, he also goes by another name some may not know about. The Dogfather.

Joe Gatto is not only an accomplished comedian. He is also an avid dog lover. He recently wrote a book entitled “Dogfather: My Love of Dogs, Desserts and Growing Up Italian”.

“I’ve been a big advocate of adopt-don’t-shop,” explains Gatto, “I wanted to write about all my dogs that I know and love and are named after these desserts, and the experiences I’ve had with rescue and coming across these beautiful souls.”

Gatto has taken in many abandoned and stray dogs over the years. He has been very vocal in giving these animals a better life. He has tried to spread the message to adopt, rather then buying from pet stores and breeders. There is even an Instagram page dedicated to his dogs.

Joe Gatto recently posted an update on the newest member of the Gatto family, Struffoli, on his Instagram page.

“Safe to say Struffoli is happy and settling in nicely. This girl’s gentle soul has stolen my heat. Get comfy girl. You deserve it.” said Gatto on the post.

The Gatto family adopted Struffoli from Jake’s Rescue Ranch. Rescuers found Struffoli Homeless and giving birth to her puppies under a car in the Bahamas. They rescued Struffoli and her puppies. One hundred dogs came to the United States for refuge in November of 2020. Jake’s Rescue Ranch took five of those dogs with Struffoli being among them. Struffoli would make her way into the Gatto’s home where she will surely live out the rest of her days surrounded by love.

Joe and the Gatto family are true inspirations. Remember to Adopt-Don’t-Shop and check back with TV Shows Ace for more news and updates.