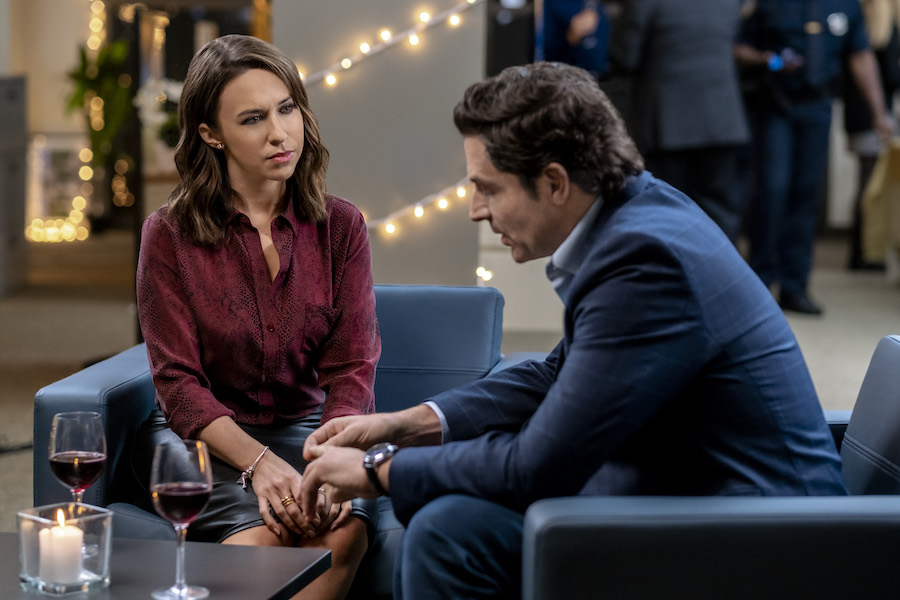 The dream team of Lacey Chabert (Christmas Waltz) and Brennan Elliott (Christmas In Vienna) have returned for another Hallmark Movies & Mysteries original. They are starring in the upcoming Crossword Mysteries: Terminal Descent. This is the fourth movie in this original mystery series.

In addition, Lochlyn Munro (Riverdale), Barbara Niven (Chesapeake Shores) and John Kapelos (The Umbrella Academy) are starring along with Lacey and Brennan.

Moreover, this new mystery premieres on Valentine’s Day. Here is what it is all about.

What Is Crossword Mysteries: Terminal Descent About?

Are you ready for Lacey Chabert and Brennan Elliott’s latest Hallmark mystery? According to the Hallmark press release, Tess Harper (Chabert) is ready for a “groundbreaking” challenge. The crosswords editor is involved with a “puzzle-solving challenge” with BB, a nifty new supercomputer.

But the death of the creator brings in Detective Logan O’Connor (Elliott), as the XCal Technologies CEO (Munro) is in the midst of the investigations. Of course, Tess can’t help but be part of this.

Meanwhile, Aunt Candace (Niven) and Chauncey (Kapelos) are spending quality time together. Chauncey is contemplating retirement, and Aunt Candace is there to offer advice and perhaps some new options.

In addition to Hallmark’s Crossword Mysteries: Terminal Descent, Brennan and Lacey filmed the fifth movie in the series, Riddle Me Dead.

According to Brennan Elliott, the intention is that some time in early 2021, they plan to film the sixth episode. According to IMDb, the still unnamed movie is in pre-production.

They film the Hallmark Movies & Mysteries series in Vancouver. Right now, during the Covid restrictions, there is a 14-day quarantine before they start filming. Both stars will likely share on social media when they arrive to the Canadian city to start pre-production.

The pair have been in over 10 Hallmark productions already. They are more than a good acting team, the pair are friends.

Back in 2019, when the Crossword Mysteries series was first released, Lacey spoke to People about her relationship with Brennan. “When Brennan and I decided to collaborate on it, I was thrilled.” She went on to give some insight into their relationship. “He’s become a dear friend. Our families are close friends. You can really only be as good as your partner in the scene. We challenge each other.”

The two were first paired up in All Of My Heart, and the rest has been history.

When Can You Watch Hallmark’s Crossword Mysteries: Terminal Descent?

However, check listings in case of a schedule change.