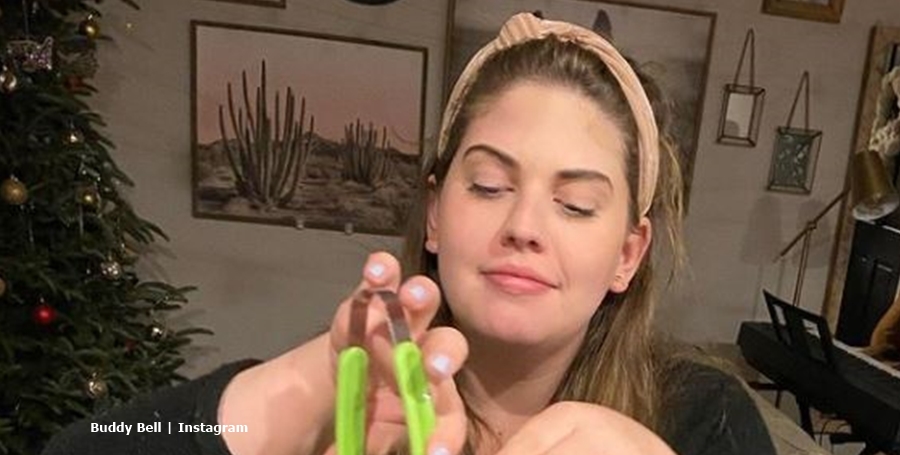 Buddy Bell & his new girl, Courtney, have become rather cozy these days. And, he made her a yummy looking salad. And every My Big Fat Fabulous Life fan knows that Whitney Way Thore just loves his salads. Upping their relationship, Buddy and Courtney even moved in together, and they work on redecorating the apartment. So, it looks really serious. TLC fans hope that Whitney contains any jealous feelings she might harbor.

On January 8, we reported that the apartment Courtney and Buddy share looks like it’s undergoing conversion into a gorgeous love nest. Fans of MBFFL shouldn’t confuse Courtney with the girlfriend they recently saw on the TLC show though. Brittany moved on and Buddy took up with Courtney since then. Buddy usually seems to flick through girlfriends like a vacuum cleaner on steroids picks up cookie crumbs. But this time, it looks way more serious, fans believe.

Making a salad for himself and Courtney to enjoy seemingly ups the game even more. That might sound silly, but not in Buddy’s life. Recall, that Buddy often put together healthy sandwiches and salads for Whitney. And Meaww reminds readers that Brittany became rather jealous of that. Meanwhile, Whitney Way Thore acted jealous of Brittany. So, rustling up a salad is very much Buddy Bell’s way of telling Courtney he cares for her very much.

On January 11, Buddy shared two photos of a yummy-looking Cobb Salad. He said in his caption, that the inspiration came from YEAH! BURGER. And he tagged Courtney. It looked amazing, fans thought and it looked like he layered it from left to right with corn, potato salad, egg, coleslaw, chicken nuggets, and tomato. Many fans wished they could have one. And lots of them said they felt hungry after looking at the pictures.

Some TLC fans wondered if Whitney Way Thore felt a bit jealous of the salad whipped up for Buddy Bell & Courtney. One My Big Fat Fabulous Life fan asked, “But did you make one for @whitneywaythore and did some chick get mad about it !? 😂❤️.”

Then, another fan of Buddy Bell & Courtney wrote, “Looks like your (sic) making salads for you and your new lady! Don’t forget to send a salad on wheels to Whitney 😂😘.”

Other comments included, “yummy!” “delicious,” “freakin awesome,” and “delish!” Actually, even if you’re not into eating salads, Buddy’s one might tempt your appetite.

In the comments, a number of fans asked Buddy if he makes and delivers. And others instantly wanted one for themselves. Mind you, a lot of them would rather leave out the corn. But, it certainly looks like for the next few days, plenty of Buddy Bell & Courtney’s fans opt for a healthier eating option.