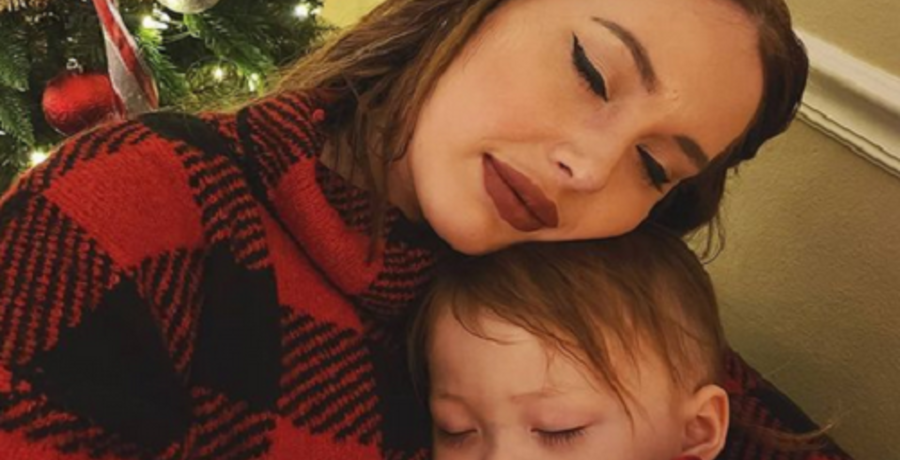 90 Day Fiance fans are wondering if Deavan Clegg is pregnant. The former TLC star and her new boyfriend Christopher “Topher” Park had a live session on YouTube on Monday, January 11. Some people think Deavan is pregnant because she was hiding her stomach the entire time. Deavan received a lot of pregnancy questions during the live-streaming session.

But she shot down the pregnancy rumors once again. The model admitted that she “just ate too much” before. Not a wise decision to make when you’ve been the center of pregnancy rumors for months. Fans think Deavan is sending mixed messages and is trying to get pregnant with Topher.

Is the 90 Day Fiance alum pregnant?

On Monday, the 90 Day Fiance alum Deavan Clegg and Topher Park hosted a live chat on YouTube. The couple wanted to simply say “hi” to their fans and give dating advice. Deavan looks noticeably different in the video session. Her face appeared bloated.

During the live chat, she kept holding a red velvet pillow in front of her stomach. This led fans to ask her if she’s pregnant again. The 23-year-old shares a 20-month hold, Taeyang, with estranged husband, Jihoon Lee. She also has a 5-year-old daughter, Drascilla, from a previous relationship.

Fans are convinced that Deavan wants to have her third child as soon as possible. Deavan’s mom, Elicia Clegg, even admitted that she doesn’t take birth control because she’s allergic. In the first season of 90 Day Fiance: The Other Way, Deavan and Jihoon quickly consummated their relationship. The couple didn’t use protection during their drunken night in the bathtub.

Fans shared their reaction on the 90 Day The Melanated Way Instagram page. Some of them have a feeling that Deavan is pregnant again. They don’t believe that she’s just “bloated.” Here are just some of the comments:

Deavan is tired of the pregnancy questions

In November 2020, she responded to the pregnancy rumors. Fans wanted to know if she was pregnant during her birthday weekend with Topher. The 90 Day Fiance: The Other way star shared photos from their hotel room in Park City, Utah. Then, the OnlyFans content creator took to her Instagram Stories to shut down the rumors.

“Friendly reminder that I’m not pregnant,” Deavan wrote in the caption of her selfie. “Stop asking. It’s extremely rude [side eye emoji].”

Deavan suffered a miscarriage in October 2019 when she was married to Jihoon. The couple opened up about their loss on Season 2 of 90 Day Fiance: The Other Way. Their marriage did not last and they split in May 2020. Deavan has since moved back to America with both of her children.

What do you think? Do you agree that Deavan is pregnant again? Sound off below in the comments.