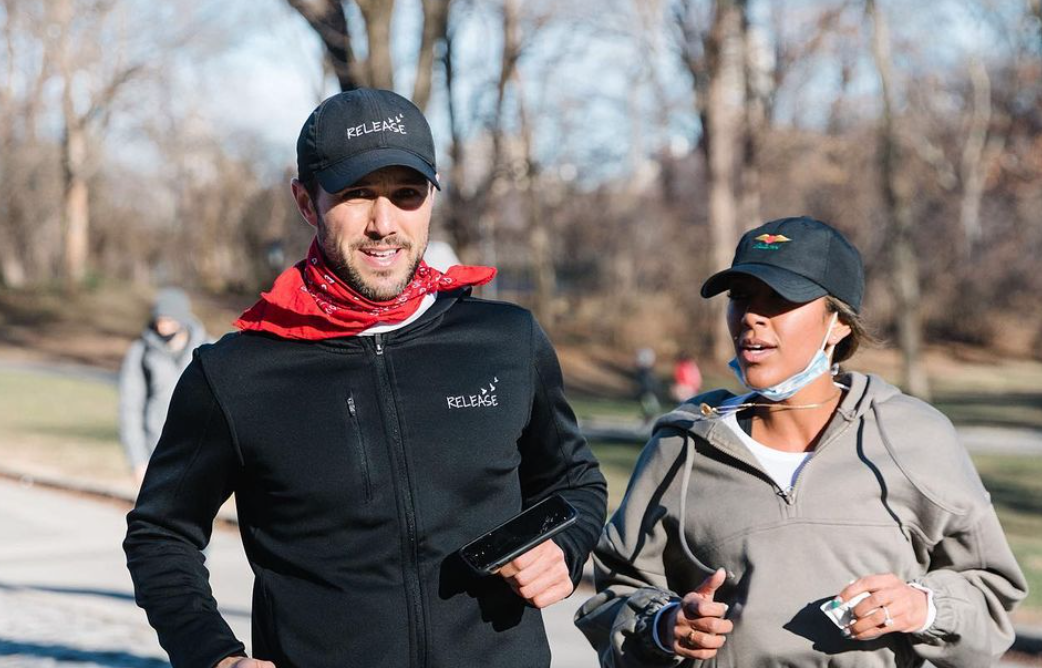 Tayshia Adams and Zac Clark are using their social media following to promote a good cause. The former Bachelorette stars are encouraging fans to join them in a run for charity.

Tayshia took to Instagram to post about her, her boyfriend, and a run they are doing. Zac and Tayshia met on The Bachelorette and they have quickly become a fan favorite when it comes to couples in Bachelor Nation. It seems that they are pretty happy with each other too. In a new Instagram post, Tayshia shared an image of both of them going for a run.

“I can’t feel my face when I’m with you🎶🥰… but for real it’s too cold pls send help!!,” she starts the post off. It’s clear from the pictures that the two are still really happy with each other. In one of the photos, they are even hugging and look absolutely adorable.

She continues the post by saying that she was part of a charity run. She appears to have gotten involved in the run with a huge group of her friends.

“Had so much fun doing the @nyrr charity resolution run today with such great people. Guess it’s officially time to get back into running! First run in the city in the books! 🤗,” she writes.

Of course, Tayshia wasn’t the only one to post about this charity run. Zac also posted and shared a lot more information about it.

“I am a huge believer in community and I am an even bigger believer in being inclusive. Both @nyrr and @releaserecoveryfoundation embody those core beliefs,” he writes on his post.

He continues to encourage his followers to do the same thing.

“As 2021 ramps up I I want to invite EVERYONE to start the year by running in the @nyrr Virtual Resolution Run 5K (link in bio). I am am not a big resolution guy but I do believe in acting with purpose…so pick a charity close to your heart and tag them in a post along with #resolvetorun – your resolution can be to support that charity all year. I will be out there tomorrow rippin around for @releaserecoveryfoundation. Let’s roll!!!!,” he concludes.

Do you follow Tayshia Adams and Zac Clark on social media? Do you like them together? Let us know in the comments below and come back to TV Shows Ace for more news on all of your favorite Bachelor Nation stars.

Blayke Busby: Actress? See The Tween’s Stage Debut At Summer Theater Camp
Is This A Sign ‘Bringing Up Bates’ Will Be Canceled?
‘American Pickers’: Frank Fritz Did Rehab Before Getting Fired
Javi Marroquin Calls Cops On Lauren Comeau For Abuse, Guess Who Has His Back On This?
Candace Cameron Bure’s Mini ‘Fuller House’ Reunion Has Fans Talking