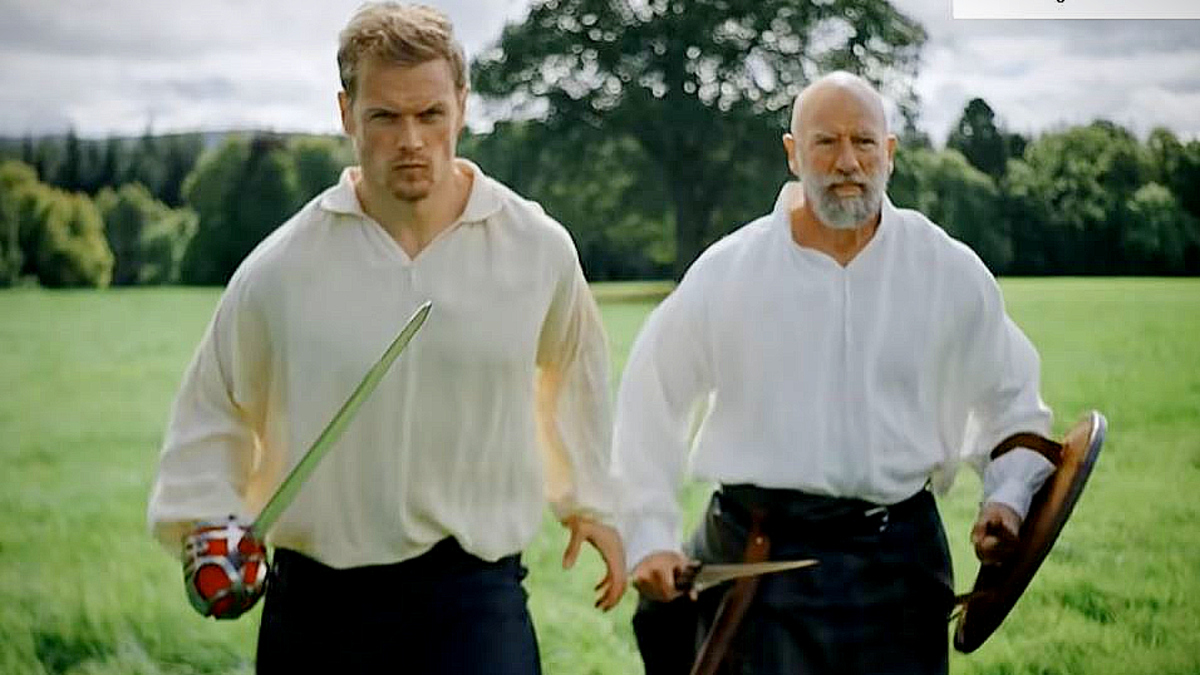 Fancy a car trip and hiking jaunt in old Scotland with expert guides?  Now the Outlander stars of Starz—Sam Heughan and Graham McTavish—are paired up and showing folks who may not have had the good fortune to head to Scotland how gorgeous a country it truly is in a new series Men In Kilts: A Roadtrip with Sam and Graham for Starz.  The anticipated series comes Valentine’s Day, February 14.

Bonnie Scotland is the place where Scottish group The Proclaimers celebrated in many of their popular songs, and is home to the most amazing highland views and sea swept islands. The country is filled with gorgeous old castles, stunning natural vistas and the preserved cobbled streets of Edinburgh on one side of the country to the more boisterous and industrial town of Glasgow on the other.

The industry most discussed is their expert whisky making, a huge multi-billion dollar business that sees myriads of distilleries, some corporately owned and some artisan smaller operations.  Scotland has six distinct whisky regions, Highlands, Speyside (the largest), Lowlands, Campbeltown, Islay and Islands.

Heughan and McTavish will head to star whisky makers Lagavulin, a fine producer of Islay’s famous peaty forward, iodine tinged and saltier noted whisky. If you are a scotch lover, do not overlook touring haunted distillery Auchentoshan located outside of Glasgow. This is a must-see must tour facility that barely survived the shelling of World War II and say many lives lost including huge amounts of aged whisky.

The two large cities are must-see stops, and each city has a distinct feel, food scene and style. To make it easy, both are connected by the Carstairs train line that serves up booze and snacks while you zip from Queen Street to Waverley in scenic countryside views.

Make sure if you do go to book a room in Edinburgh at The Balmoral Hotel which has a stunning central spot to set out for day walking trips in the Royal Mile, ending up in the Edinburgh Castle.

Undoubtedly Heughan and McTavish will give us a great insider’s tour of the entire country and places lesser known than the usual tourist spots.

Men in Kilts: A Roadtrip with Sam and Graham premise

Get ready for the greatest road trip ever attempted without pants. Men in Kilts: A Roadtrip with Sam and Graham premieres this Valentine’s Day on Starz. The half-hour, eight-episode series gives us lucky viewers a one-of-a-kind perspective on everything from Clans and The Battle of Culloden to whisky tasting and folk dancing, with Sam and Graham’s fun and spirited banter and adventures leading the way.

These two are getting paid to visit and experience one of Europe’s gem countries that sits above jolly olde England. See why they say, “if it’s not Scottish, it’s crap!”

“Men in Kilts: A Roadtrip with Sam and Graham is a fun-filled buddy travelogue through Scotland led by Outlander stars Sam Heughan and Graham McTavish. The two will reunite for an epic adventure, exploring their heritage and meeting an incredible collection of people who truly showcase what it means to be Scottish.

Men In Kilts: A Roadtrip With Sam And Graham premieres Sunday, February 14th, 2021 on STARZ