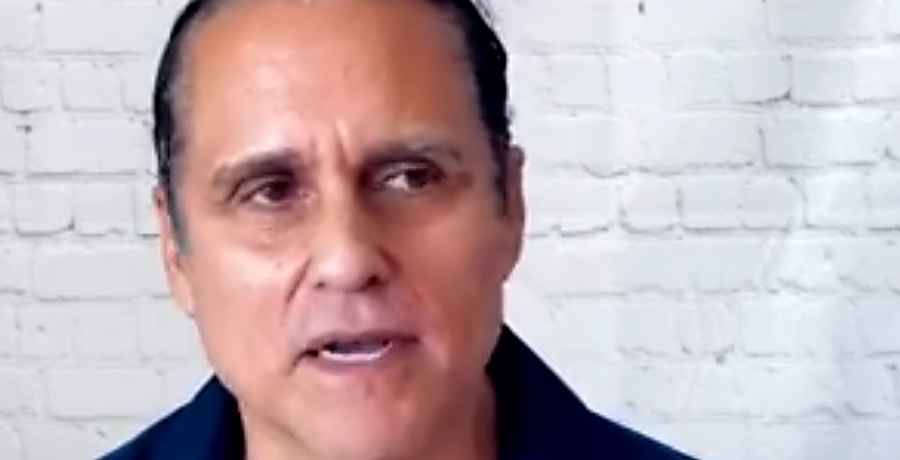 Fans were concerned when Sonny Corinthos fell off the bridge and disappeared into the Hackensack River below. They wondered if Maurice Benard was leaving General Hospital. Rumors were flying all over the Internet. One fan asked Maurice Benard on Twitter if he had COVID-19. They obviously thought that was why he isn’t on the soap right now. Benard was quick to respond, saying, “Thank God, no.”

Despite that response, the actor who plays Sonny has been deliberately keeping things vague on social media. As always, he does respond to the constant barrage of questions, but usually with a shrug emoji. Fans commented, “Sonny is not dead,” Benard responded with a shrug. Another asked when he is coming back, which also received a shrug.

During his time away from General Hospital, Benard has been growing a beard and has let his hair go gray. One fan said they would love to see Sonny coming back like that, saying he “rocks the gray.” Again, Maurice responded with a shrug, but we do have to agree! See the image below!

Sonny will be back on the ABC soap

Despite all the shrugs, General Hospital fans shouldn’t worry too much. Benard is sure to bring Sonny back to Port Charles. Even though the soap actor is keeping mum on details of when and how Sonny will return. Basically, no spoilers allowed.

Funnily enough, one alleged fan had complained they would rather see Sonny leave the show forever. In response, Benard joked, writing, “You just made my night.” He added, “I was actually thinking about retiring, but after reading this lovely tweet, I may just have to do another 28 years!”

How could Sonny return to General Hospital?

One of the most common predictions relating to Sonny’s return is that he is coming back to Port Charles with amnesia. As noted by Soaps in Depth, many believe that Jason and Carly actually know exactly where he is right now. They believe he is being kept in a safe house somewhere. Others think he may have been rescued and nursed back to health, maybe even by Nelle.

In the meantime, some spoilers tease that Carly Corinthos will have to soon make a heart-wrenching decision. Will she have to give up on Sonny and have him declared dead? Will the searchers of the Hackensack River and Newark Bay give up on finding him alive? If they are now merely looking for remains, Carly doesn’t want to know.

Anyone who is missing seeing Sonny Corinthos on General Hospital right now can keep up with Benard on Twitter and Instagram. Fans can also catch his ongoing series State of Mind on YouTube.

In the meantime, stay tuned to General Hospital weekdays on the ABC network to keep up with this exciting storyline.

Bekah Martinez Clears Up Rumors Surrounding Her 2018 Disappearance
‘Days Of Our Lives’ Week Of May 10 Spoilers: Jake & Gabi In Love – Nicole Beds Xander?
Teaser: The Winders Disagree Over Third Wife On Next ‘Seeking Sister Wife’
Male ‘Below Deck Sailing Yacht’ Fans Angry About Alli & Dani’s Hookup
What Did Jackson Roloff Do That Made Tori Bawl?