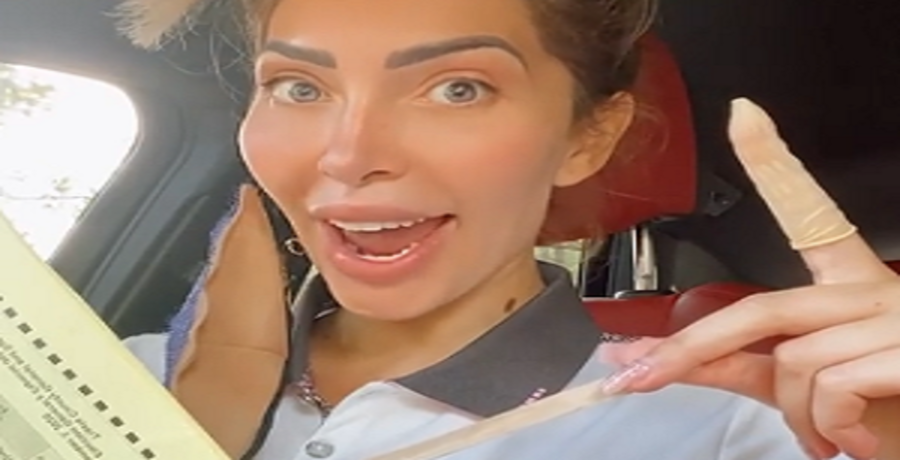 Farrah Abraham made a vow to quit Twitter. The Teen Mom alum isn’t happy that the social media app banned President Donald Trump for life. Now, she’s in search of the next social media app. However, it may pose as a challenge since nearly every platform banned him.

As fans know, Farrah loves interacting with her followers on Instagram. She’s always posting videos of herself and her daughter, Sophia Abraham. The mother-daughter duo also makes videos on TikTok. But, every social media company has banned Trump as he scrambles for his next online platform.

So, the former MTV star may have to make more than one personal vow.

On Saturday, January 9, the former adult star announced to her over 1 million followers that she’s leaving Twitter. This comes after President Donald Trump received a personal suspension in wake of the Capitol Hill riots. Farrah Abraham made the announcement via Twitter. The reality star said she would not be silenced while a “world leader” was being silent.

“#ByeTwitter,” Abraham tweeted. “If a social platform abuses its power, silences voices, and does this to a world leader – I’m not supporting or wasting further time on the corrupt privately held platform. Wrong is wrong, no spit, hate, or lies make this action ok. #TheEnd #twitter @TwitterSafety.”

But, fans didn’t get upset. Instead, they took this moment to troll the Teen Mom OG star.

“Ladies and gentleman Farrah Abraham is exiting Twitter,” one user coyly wrote. “We all know she likes to go out the back door.”

“Who are you?” another troll jokingly wrote.

#ByeTwitter if a social platform abuses its power , silences voices, and does this to a world leader – I’m not supporting or wasting further time on the corrupt privately held platform . Wrong is wrong , no spit , hate, or lies make this action ok #TheEnd #twitter @TwitterSafety pic.twitter.com/5XAufADOhO

It wasn’t just all trolls. UK journalist Duncan Lindsay took to Abraham’s tweet to slam her support of Trump.

“You don’t think terrorists should be silenced,” Lindsay tweeted. “Would you like verified ISIS accounts on here stoking attacks?”

“You engage with me & you don’t even live in my country nor would I ever read or credit anything you edit or report your mentally unstable and should be fired from reporting false views and your [sic] not supporting inclusion,” Abraham fired back.

Farrah Abraham isn’t going to influence the tech giant. Even though she announced her departure from Twitter, her profile remains active. In the meantime, Twitter stands by its decision to suspend Trump. His profile remains suspended after he used his platform to incite a riot.

“After close review of recent Tweets from the @realDonaldTrump account and the context around them we have permanently suspended the account due to the risk of further incitement of violence,” Twitter said in a statement on Friday, January 8.

Followers want to know how Abraham will make money via social media. Facebook and Instagram also indefinitely banned Trump on their platforms. Abraham is an active user on Instagram. However, she has not unveiled her future social media plans.

After close review of recent Tweets from the @realDonaldTrump account and the context around them we have permanently suspended the account due to the risk of further incitement of violence.https://t.co/CBpE1I6j8Y

Fans previously called the television personality “money-hungry” after Sophia demanded $25,000 to follow other accounts on social media. The 11-year-old child star used the direct.me platform to advertise her fee to “follow you on the social platform of your choosing.” Fans criticized Abraham for exposing her daughter to creeps. The controversial star also got slammed for sharing a video of herself with needles in her face.

What do you think? Do you think Abraham will give up Twitter forever? Sound off below in the comments.