Now, Chase was pretty quick to delete this Instagram post when he realized he made a mistake. But, it wasn’t before his sister Savannah noticed it. She took a screenshot of her little brother’s mistake. And, she posted it on her Instagram Stories. She wanted to document the silly mistake her brother made.

According to the screenshot, the post had been up for 15 minutes. And, it had been liked nearly 10,000 times. Savannah Chrisley included her own comment in the screenshot. She noted “Well it’s not even her birthday.” Chances are pretty good Chase decided to delete the embarrassing post once he realized the mistake he made.

Savannah made sure to troll her little brother so she could tag him further.

When Chase Chrisley wishes mom a happy birthday and it’s not even her birthday. Good try! Haha.”

By the looks of the screenshot, there were many of people who joined Chase. Joined him in wishing his mother a happy birthday. Even though it was not her special day.

Wait, so when is Julie’s birthday?

See, now here is where things become a little unclear. Technically, we understand — to a point — why Chase wished her a happy birthday. There are tons of websites that say her birthday is January 9th, 1973. Google itself, however, does not attach an actual date to her birthday. Instead, Google just confirms she was born in January of 1973. So, it sounds like Julie Chrisley did celebrate a birthday sometime this month. And, she would have turned 48 years old on that birthday. 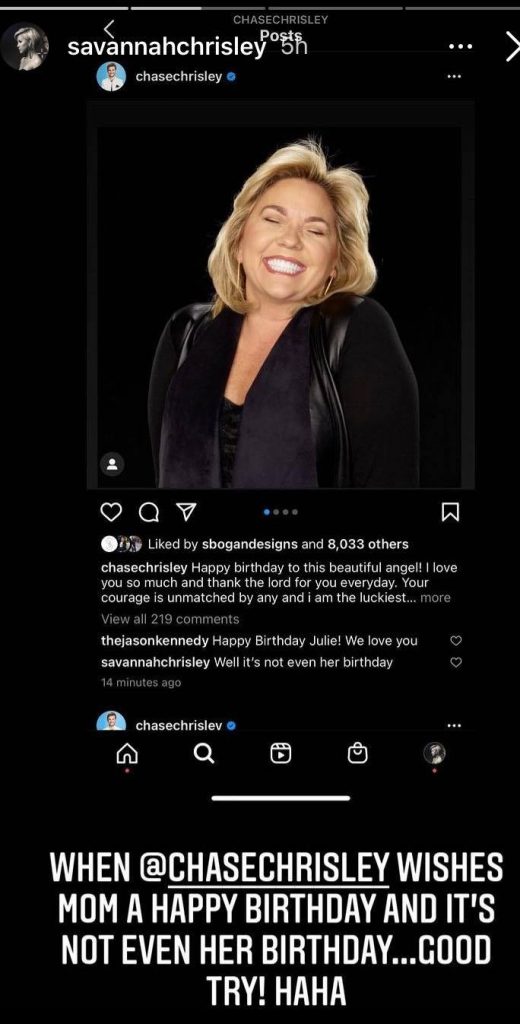 The exact DAY of her birthday, however, seems to be a little unclear. Now, if yesterday was Julie Chrisley’s birthday… It seems a little unusual that no one in the family wished her a happy birthday on Instagram. Either way, fans hope Julie Chrisley had a wonderful day and a wonderful month whether or not she actually celebrated a birthday.

While we may not know exactly when Julie Chrisley’s birthday is… We enjoy Savannah Chrisley trolling on her brother just a little bit. What do you think about Chase accidentally wishing his mother happy birthday on the wrong day? Share your thoughts with us.