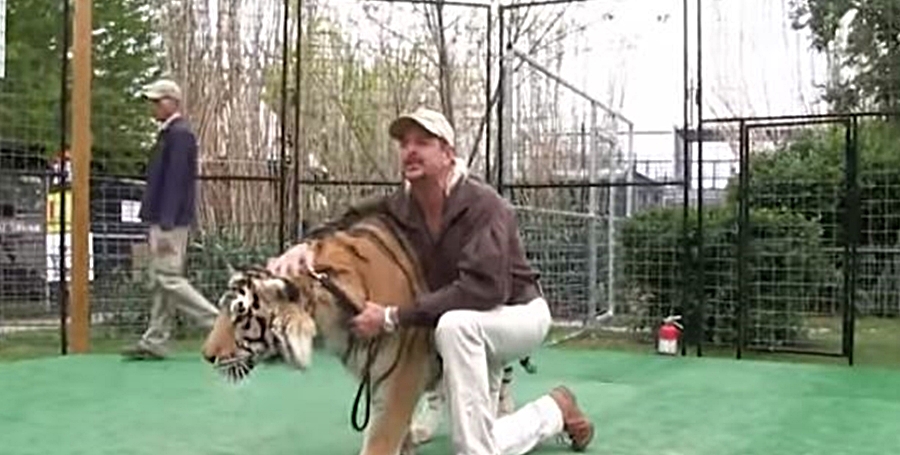 Joe Exotic, (Joseph Maldonado-Passage) took to Twitter and expressed his heartbreak. The news arrived that his dad passed away from COVID-19. Bear in mind, he also lost his mom during what he calls his “nightmare.” Joe sits in jail sentenced to 22 years for charges of allegedly plotting to kill Carole Baskin.

Tiger King fans might recall that Jeff Lowe took over his Zoo before Carol Baskin. And when his mom died, Joe firmly believed Jeff had a hand in her murder. Now Jeff also lost the Zoo, and according to Carole Baskin, he left an appalling mess beyond him. In fact, the stench of rotting meat and garbage kept her very busy after her elimination from Dancing With the Stars. Jeff denied it, of course, the same as he denied any sort of plot to remove Exotic Joe’s mom.

Now, Joe Exotic mentioned his mom when heard about his dad’s passing. TMZ reported that “Joe’s father, Francis Schreibvogel, recently died following complications from COVID-19.”And he desperately hopes to attend the funeral. he took to Twitter and wrote, “2021 already is showing the evil side. I just learned my Dad has passed away now also. So hard being here knowing I am innocent and now I have lost both parents during this hell, when is anyone in this system going to care?”

2021 already is showing the evil side. I just learned my Dad has passed away now also. So hard being here knowing I am innocent and now I have lost both parents during this hell, when is anyone in this system going to care? pic.twitter.com/vY8nFPDTv6

Since his first post, Joe expressed more frustration. He later spoke about Carole Baskin. he said that she pretty much took away his parents and “everything I have ever had in my life.” He noted that she got his parents’ farm (partly) and “their dead son’s property that was his memorial just because she has to be number one in the Tiger world.”

Ramping it, up the Tiger King personality noted, “May you rot in hell, all of you.” He said that he knows that their deeds are so bad that only “God can pay them back.” And now, he pays for their “greed.”

Actually, Joe Exotic gets a great deal of sympathy. More so, since his dad passed away from COVID-19. Lots of people believe in his innocence. Joe reached out asking Kim Kardashian to try and help him get a Presidential Pardon. But right now, that looks unlikely. Donald Trump right now faces the possibility of impeachment in the near future.

Hope fades for an early release?

While his attorneys felt in early December that they were “close” to a Presidential Pardon for Exotic Joe, it’s not clear that happens now. 14 hours ago, Joe again appealed in his hashtags for a pardon. But since the events on January 6 in Washington DC, Trump probably has a lot of other bigger issues on his mind.