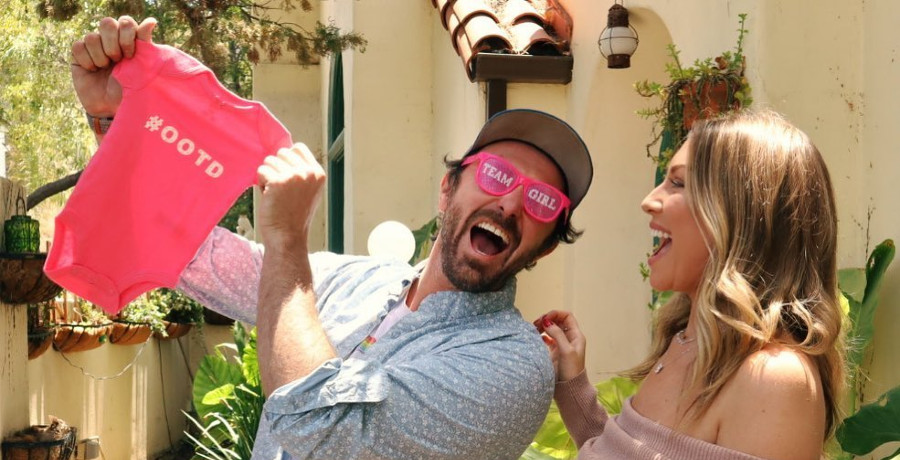 In June of 2020, Bravo fired Stassi Schroeder and several co-stars for their behavior. A week later, the saucy reality star made a grown-up announcement: She was pregnant with her first child with then-fiance Beau Clark.

The couple was originally planning to marry in October 2020. The pandemic threw a wrench in those plans, so they decided to try for a baby instead. Well, it worked! Stassi and Beau did later secretly marry in a small wedding in September 2020, but still plan for their dream wedding in Italy at a later date.

Due to public outcry against her at the time, Stassi opted to skip a big gender reveal. Instead, she shared a sweet snapshot of her and Beau holding a pink onesie, indicating they were having a girl.

Before her baby’s arrival, Stassi was OVER being pregnant. But like mother, like daughter! Her little one was stubborn and refused to budge until she was good and ready. In the days before the baby’s arrival, Stassi tried all kinds of things. She walked, she enlisted Beau’s help with a romp. When the popular ‘pregnancy salad’ from a California cafe didn’t do the trick, Stassi tried something more drastic. She hit up Taco Bell after several of her Instagram followers sent her a dm with the suggestion of spicy food.

But still, her baby wasn’t ready to make her big debut in the world.

Who Will Be Next – Lala, Brittany or Scheana?

Stassi Schroeder and some of her former co-stars made a ‘pregnancy pact’ to get pregnant at the same time. Lala Kent and Brittany Cartwright were part of the pact. They both announced in September that they were expecting babies. Like Stassi, Lala is expecting a baby girl. Brittany Cartwright’s baby will be the first boy in the group.

Scheana Shay is on the outs with Lala and Stassi, so she wasn’t part of the pact. In July, she made the sad announcement that she has suffered a miscarriage. It seems that she found out she was pregnant around the same time that Stassi did.

In October, the “Good as Gold” singer revealed that she was pregnant again with her rainbow baby! Scheana is expecting a girl with her boyfriend, Brock Davies. The two have yet to announce any plans to wed.

All three of the expectant moms are due in April. Which one will have their baby first?

Congratulations to Stassi and Beau on the arrival of their sweet little girl!