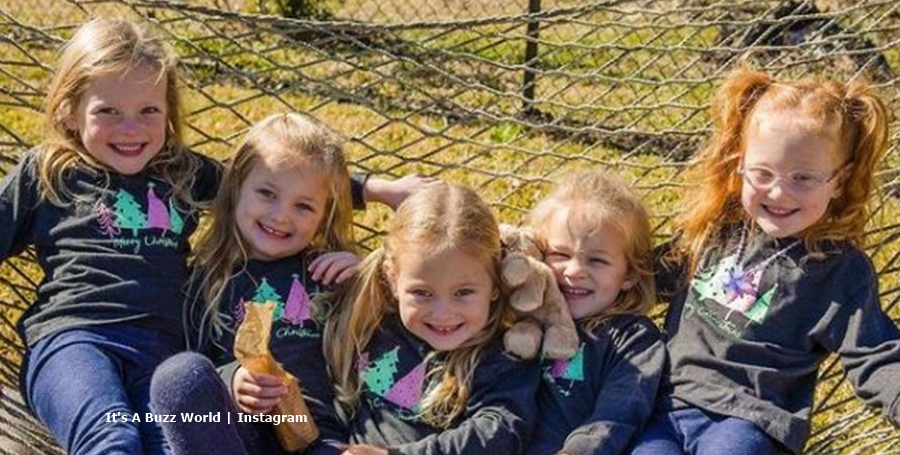 OutDaughtered quints seem totally into dancing at the moment. Mind you, that came with consequences for Riley who ended up at the ER. But undeterred, her sisters Hazel and Parker made up a dance. And, they couldn’t wait to show it to their mom Danielle. Hazel even put on some blue eye shadow for the special presentation.

We reported that Adam Busby took quint Riley along to the ER. It came after she slipped and fell while dancing in the bathroom. Adam explained that Riley and her sisters danced. But dancing on the wet floor of the bathroom seemed like a poor choice of venue. The poor little girl slipped and banged her head. Adam explained that Riley had a “small gash on the back of her head.”

As it involved a potential head injury, Adam Busby took his daughter to the ER. And there she got a staple to close the wound. Actually, it doesn’t hurt to take some precautions if heads bang things. After all, it can sometimes lead to a concussion. Children’s Health notes that “the most important thing parents should do when a kid bumps her head is [to] trust their instincts.” Dr. Powell noted that “there’s nothing wrong with erring on the side of caution: If you aren’t sure, see a doctor.”

Well, it turned out that Riley’s fine. But the OutDaughtered quint’s dance mishap didn’t stop her sisters Hazel and Parker from continuing their dance mode.

Quints Parker and Hazel do an adorable dance for their mom, Danielle

Taking to her Instagram Stories on January 7, Danielle shared a few clips of Parker and Hazel dancing. She said that they made up the dance and wanted her to see it. The cute quints held hands and then started their routine. You can see some of the adorable screenshots below. Very serious about their dance, Danielle giggled quietly as she watched. Then at the end, she asked who made up the dance.

OutDaughtered quint Hazel said that Parker created the steps. Then, Danielle noticed that Hazel wore blue eyeshadow for the special dance. Maybe Parker put it on for her. Fans know that Parker looks like she could easily become a model one day, as she shows a lot of natural poise and grace. Perhaps she might one day take up professional dancing. In April last year, when Adam shared photos of the kids posing with their scooters, fans agreed she might one day walk the catwalk.

What do you think of the OutDaughtered quints suddenly showing such a lot of interest in dancing? Can you remember being younger and enjoying the new trends that came along from time to time? Sound off in the comments below.