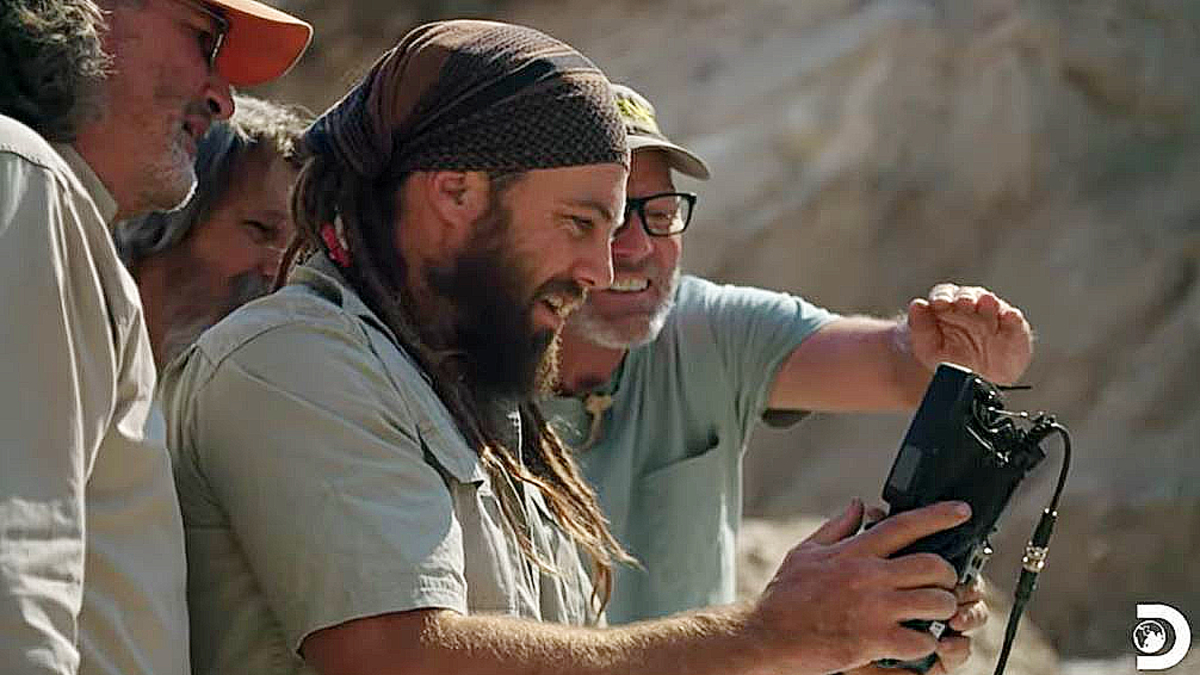 On tonight’s fascinating episode of Mystery At Blind Frog Ranch, Chad Ollinger and his team are that much closer to discovering where the fresh water source feeding the thousands of frogs is coming from.

Last week we were introduced to the team that his dad Duane had assembled, and this week is all about the progress they have made.

And with an access tunnel to the underground cavern finally opened, and a tantalizing clue discovered, Chad takes a risky dive into the flooded cave system — and what he finds will defy all explanation.

TV Shows Ace exclusive clip below reveals that there is what Duane Ollinger described as a “honey hole” void with a wellspring of fresh water that moves the elements and the gold underground.

Last week, Geologist Eric Drummond confirmed there was gold in their samples taken and now tonight you will see how the men follow the underground cavern trail to unravel more gold finding opportunities.

The team are using technology and underwater cameras to find out why the frogs are thriving and discover where the fresh water is coming from.

The clip shows the team observing the feed from the camera. Chad Ollinger says: “That water’s clear.” He notes that the new set of frogs “didn’t hitchhike in” the body of water.  The fresh water source coming in is making the ideal conditions for the frogs to thrive.  The crystal clear ewater is coming up from an opening that reaches deep dwn into the underground cavern system.

As they explore further into the water a cave opening is shown and more of a new tunnels is shown.

The camera equipment goes down a 42 foot descent. The verdict? Time to suit up and see where the underground water filled cavern leads to.

But even more than the hunt for gold is unlocking of the mystery of why thousands and thousands of blind frogs live in a cavern near the famous Skinwalker Ranch.

As Ollinger noted in the premiere, he and his son Chad have invested in this exploration, and are trying to unravel the mystery and discover the riches they believe lay in this strange part of Utah.

The series shows the Ollingers as they explore the water sources and caverns of this part of Utah. Joining them is Charlie Snider who heads security. Geologist Eric Drummond was also brought in to help.

A year prior, they drilled the cavern and found an entry point into the cavern system. What happened is that water filled their drill site and the in the process cleared the way to get through to the underground maze of tunnels.

There are some places on earth where the land just seems different, and Blind Frog Ranch in eastern Utah is a spot that the locals claim is cursed. Blind Frog Ranch has drawn treasure seekers for hundreds of years.

Perhaps it is Aztec treasure or caverns of gold and silver, maybe it is Mormon mines, All the theories and possibilities are what have fueled the interest of Duane Ollinger’s lease purchase of the 160-acre ranch in Utah’s Uintah Basin.

But Duane isn’t concerned with the lore. After discovering a system of seven underground caves that run through his property, he is singularly focused on finding what’s hidden in them.

With his money, resources and reputation on the line, Duane and his son, Chad Ollinger, friend and retired Sheriff’s Deputy, Charlie Snider, and Eric Drummond, a renowned geologist who will help him map the faulted land.

Tune in tonight to see how far they all get into the cavern:

Mystery at Blind Frog Ranch airs Friday at 10 PM ET/PT on Discovery Channel. It will also be available on discovery+