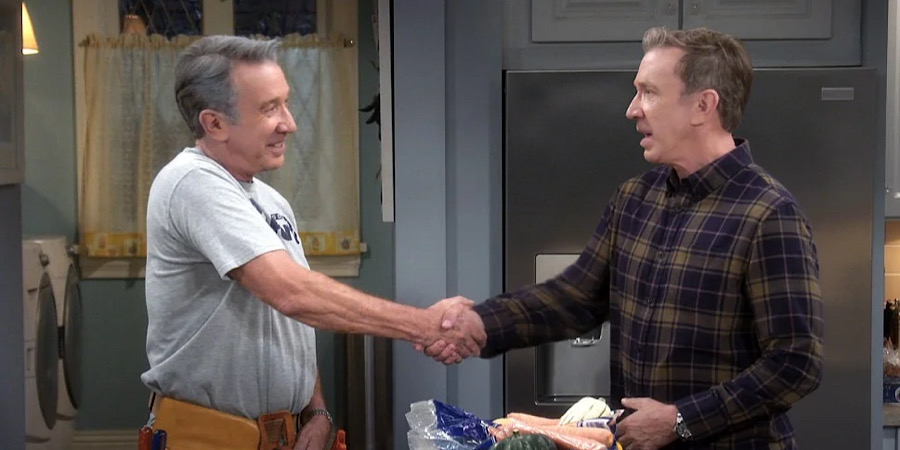 On last week’s Season 9 premiere of Last Man Standing, the series jumped approximately two years forward. Yes, it addressed the pandemic briefly at the beginning. But, it more or less referred to it as the monster under the bed–the one we must protect one another from. Mike realized he had been protecting Mandy from the real world for far too long. Yet, she was extremely capable of doing things on her own. She proved this in the way she parented daughter, Sarah. Ed got back at Chuck for all of the birthday caravans he executed during quarantine. It was definitely a relatable nod to all the parades 2020 saw and 2021 will see. But, the second episode holds nostalgia. This is the final season for the hit series, so why not bring back an old friend?

Mike Baxter Is The Last Man Standing- With No Pen

It is the tenth anniversary of the Outdoor Man vlog. So, Mike is trying to come up a great topic and something amazing to say to inspire. Unfortunately, he just cannot think or get silence. Vanessa comes in to the kitchen and tells him he needs his lucky pen. He cannot find it and as she is choking on cereal, she presses the garbage disposal. Bye-bye Mike’s lucky pen, which is now many little bits. In his office, at work, Mike is bouncing a ball against the door, torturing Chuck and Ed. They need to put a stop to this. It usually takes his 20 bounces to come up with an idea but not working.

Ed suggests he work at home. Unfortunately, Vanessa wants him to fix the disposal so they suggest he hire someone. He vehemently objects to that idea so they attempt to bribe him. Ed offers his office; Chuck offers two hundred dollars. Finally, Mike says he will go home and deal with the disposal but he won’t hire anyone to fix it. That is his job because he is a man. He really is just stubborn.

When Mike comes home, a repair man is already there. He is complaining how he parked his van when Vanessa runs out to greet him. She says when the repair guy found out it was Mike’s home, he stayed because he had to meet him. Mike tells her he had comes up with his vlog topic, how everyone is different like snowflakes. Then, he sees the repair man–Tim “The Tool Man” Taylor. Tim, Mike, and Vanessa cannot get over how much the two of them look alike, except Mike dyes his hair. They exchange snarky comments and Tim says he had a television show once. He’s also been told how much he looks like Mike so he could not wait to take on this job.

In bed, Vanessa cannot believe Mike and Tim did not get along. She says they have a lot in common. Tim has three grown sons and are very similar. Mike does not care as he has to work on his vlog. His topic is no longer relevant since he sees people are the same; he met his doppelgänger. The next day, Tim is back for more improving but Mike says they are done with him. In a sad but sweet moment, Tim references his late neighbor, Wilson. He tells him he will get a pro out to help and it will be on the house. In typical Mike fashion, he notes he looks just as good walking away.

At Outdoor Man, Ed and Chuck are shocked how much Tim looks like Mike. Of course, they make him say things they’ve always wanted Mike to. Mike thanks Tim for sending out a great repairman. He also says he watched Tim’s old shows, which Tim loved doing and Mike suggests a reboot.

You can catch Last Man Standing every Thursday night at 9:30pm on FOX.