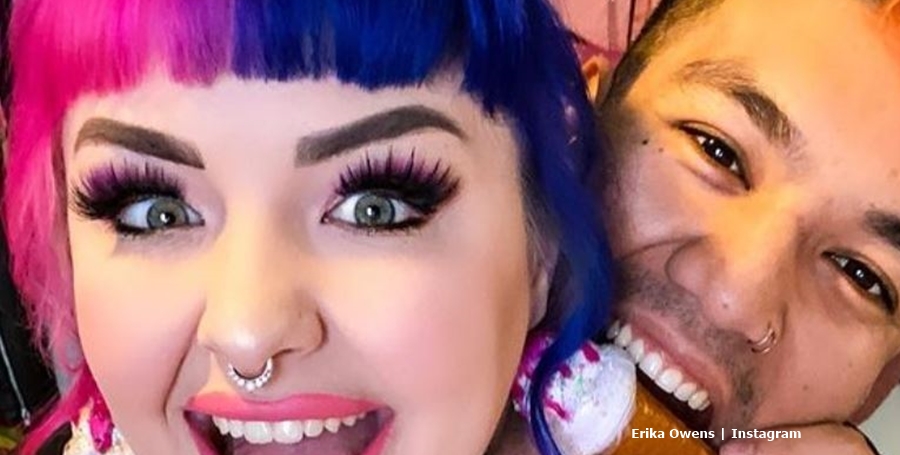 90 Day Fiance Erika Owens found a new beau named Chris Siclari about six months ago. So far, they look really strong together. And, they seemingly enjoy their lives together. Chris, a Filipino man, appeared on Erika’s Instagram and fans immediately accused her of just pretending when she appeared on TLC with Stephanie Matto. Did Chris and Erika progress to the point of marriage?

We reported in October, that Erika and her new man Chris enjoyed touring Australia together. They shared loads of nice photos of themselves on their adventure. But many people slammed her. After all, TLC touted her and Stephanie as the first “same-sex” couple. Naturally,  critics felt that she just used the franchise for a few moments of fame. Nevertheless, she always claimed to be bi and not exclusively lesbian. So, her fans seemed happy for her and Chris.

Each time the 90 Day Fiance alum posts, Erika Owens seems more and more delighted with Chris. She posted up comments like, “I love every adventure, and every day with you.” In fact, they already live together in Adelaide, so it all looks like a really serious romance. But did they get serious enough to actually tie the knot? Some fans became curious when she shared some photos on Instagram on January 7.

Married poses but with a twist

When fans saw the photos that Erika shared, many of them asked if she married Chris. One fan asked, “Did y’all get married? CONGRATULATIONS IF YOU DID. Love this 💜🙏😍.” And another TLC fan asked, “Are you getting married? Congrats if so 🎉.” And, it’s no big surprise they asked about that. After all, when people pose wearing a veil and a wedding dress, that’s a reasonable assumption. But the quirkiness from the couple revealed Chris in the veil and white dress. Meanwhile, Ericka wore a stunning red dress.

One unfortunate 90 Day Fiance fan said they felt a bit “confused” and asked if “Chris is also Gay.” Well, Erika gave her what for. And that seemed a bit of a shame, some fans thought. Clearly, the person who asked felt interested and tried to understand the photo. Erika said, “my boyfriend isn’t gay because he tried on a dress, and if you think I should be nice to you despite your clear homophobia and lack of understanding that gender doesn’t mean you have to wear a specific type of clothing, then you can honestly nick off haha.”

Nasty Erika chided by other fans, but no, it looks like they didn’t actually marry

At least one fan slammed Erika for her nastiness. They commented, “If your boyfriend is gay just say it. don’t be rude to people tryna make them feel or look stupid when they ask you a simple question sheesh you aren’t nice at all.” And maybe the fan has a very good point. After all, as someone pointed out, not everyone was raised to understand the LGBTQ culture. Aggression only likely makes people take a step back from trying to understand and educate themselves.

Apart from that, the rather nasty comment by Erika Owens proved that they didn’t really get married. Recall, she said that Chris “tried on a dress.” And in her many hashtags, the 90 Day Fiance alum mentioned fashion a lot. So probably, she and Chris just posed for a fashion shoot.