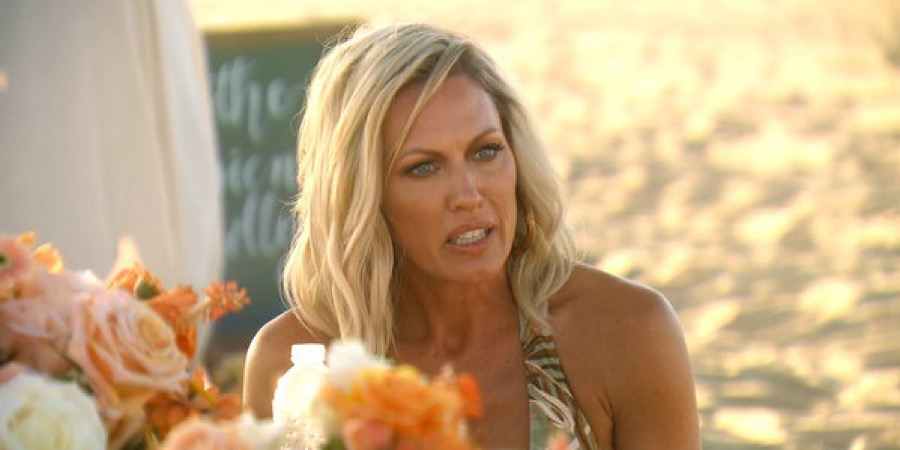 Last week on the RHOC, the ladies wrapped up their trip to Lake Arrowhead. Kelly had plans to look at wedding venues in Napa. However, that got put on hold when she had to self-quarantine after being exposed to Covid. Back in the OC, Shane was finally released from the hospital after eight days. Shannon dealt with her spiraling relationship with John and her Covid diagnosis. She also learned Braunwyn threw her under the bus in Arrowhead. And Emily tried to bond with Braunwyn, whom is no longer attracted to her husband. Let’s see what this week brings.

New Beginnings On RHOC and Moving On

Braunwyn is excited to celebrate six months of sobriety. Elizabeth also has something to celebrate: she is finally divorced. Because of Covid, the proceedings were delayed. But now, she is a free woman. Shannon is about to be down a daughter as Sophie prepares to go to Baylor University. Per usual, Shannon is going overboard with the packing and a Covid kit. Sophie has picked everything for her dorm but her mom has an insult at every turn. Then, she dictates what she wants Sophie to have. Her twins ask whose dorm is it really.

Over at Braunwyn and Sean’s home, she is ready to run. Everyone feels cooped up in the home but she has been talking to her therapist. He feels like he is just a roommate at this point. Braunwyn agrees and there is no more sexy  time. They used to have the condo where they would have intimate moments. He promised weekly nights at the Montage but is always on his phone. Braunwyn says she is working on herself whereas Sean is doing nothing for improvement. She does not feel he is engaged and that is why she goes out with her friends: because they are fun. Sean is being pushed away and the tighter he grabs on, the further she pushes.

Family Time In the OC; Emily and Gina Gossip/Catch-Up

Elizabeth’s brother, Andrew comes to visit for 30 days. She tells him about Arrowhead and how she talked about the cult. He talks about being dyslexic and being beaten because of that. They watched their aunt die because she was sick and God did not heal her. Andrew says he has been actively trying to heal from this and it took decades to get through it. Now, it no longer can hurt him. Elizabeth has finally made a therapy appointment.

Over at Gina’s, Emily has come by to catch-up – aka gossip – about Arrowhead. Gina shares how Braunwyn was talking about Shannon behind her back, saying things about her drinking. But, the main concern was Shannon and John’s relationship and how drunk they get.

Gina and Emily feel Braunwyn should have confronted Shannon, not talked behind her back. They feel this is even more applicable since Braunwyn is an admitted alcoholic. There is no right answer since Gina and Emily are gossiping, as well.

Over at the beach, Jolie is angry with Kelly, feeling she is too strict. She believes she does so much around the house and gets no credit at all. Kelly says she is hard on her daughter because she wants her to succeed. She then asks if Jolie likes Rick. Jolie says she does and he makes her happier; she says he balances them out.

Shannon and John talk about their relationship. She is ready to take the blame but he says he would never tire of her. It is time for them to spend time together again. He is ready to start spending the night.

Gina and her boyfriend, Travis are eating breakfast, talking about the school year. She will have the kids one week on and one off. Her ex, Matt won’t accept the plea deal. She just wants him to stand up and be a man, for their kids.

Emily heads over to Elizabeth’s where she opens up to her about the cult. It blows Emily’s’ mind but she feels great that Elizabeth has been honest with her.

Elizabeth says she is happy Braunwyn brought the trauma out in her. But, Elizabeth FaceTimed Braunwyn when they got home and it was not a good convo, leaving her feel empty. She says she is divorced, leading to the big question: are Elizabeth and Jimmy finally having s*x? Yes!

Braunwyn has her good friend, Shari over. She admires Shari because she is an independent single mom. But, Sean is not so fond of her because she is always around. Shari listens whereas Sean is the “fixer.” Noella joins the girls and it becomes a Sean bashing. He does not even know what kind of cake Braunwyn likes!

Things Are Changing In the OC; Shannon’s Drinking Problem

It’s hard for Shannon to say goodbye to Sophie. But, Sophie is ready to leave Newport Beach and the culture. Kelly heads to Shannon’s home, both moms shocked their daughters are getting older. Shannon has her divorce settlement out in plain sight, which is surprising but that’s Shannon Storms Beador. She talks about how she drank a lot during quarantine which made them fight a lot. This causes Kelly to reflect on all the times Shannon was intoxicated and lashed out on her. Love a good montage.

Kelly brings up Gina talking about Shannon’s drinking problem and issues with John. Shannon says she was talking to Gina all the time then three months there were crickets. She does not understand how Gina can be the judge of her without speaking to her. Then, Braunwyn and Sean’s crumbling relationship comes up. Kelly talks about Shari living with the Windham-Burkes and feels she is more than a friend. She just wants a straight answer.

Next week, on the Season 15 finale, Elizabeth enters counseling. At the same time, the ladies throw a huge beach bash. Gina talks about Shannon drunk dialing her. It also comes out that Sean has left the home but Braunwyn admits she loves both him and Shari. And things come to head between Kelly and Braunwyn.

You can catch the RHOC every Wednesday night at 9pm on Bravo.