New episodes of Chrisley Knows Best are right around the corner. And, fans have a simple question on their minds. Will Chase Chrisley’s girlfriend Emmy Medders be featured? Here’s what we know about whether this is possible.

Fans of Chrisley Knows Best have spent the last few months getting to know Emmy Medders. Truth be told, all we could know about her was what we learned by scrolling through her Instagram profile. So, it makes sense that fans would want to see her on the show. After all, it would give fans a chance to get to know her better. Fortunately, Emmy Medders recently did a Q&A session on her Instagram profile.

Unsurprisingly, she’s gained a lot of followers since Chase went public with their relationship. So, it isn’t too surprising Chrisley Knows Best fans were waiting with questions. One question in particular was whether we would get to see her on the upcoming new episodes of the series at the end of the month. Now, Emmy Medders did not give a concrete answer one way or the other. But, she did address the question. And, here’s what she had to say. 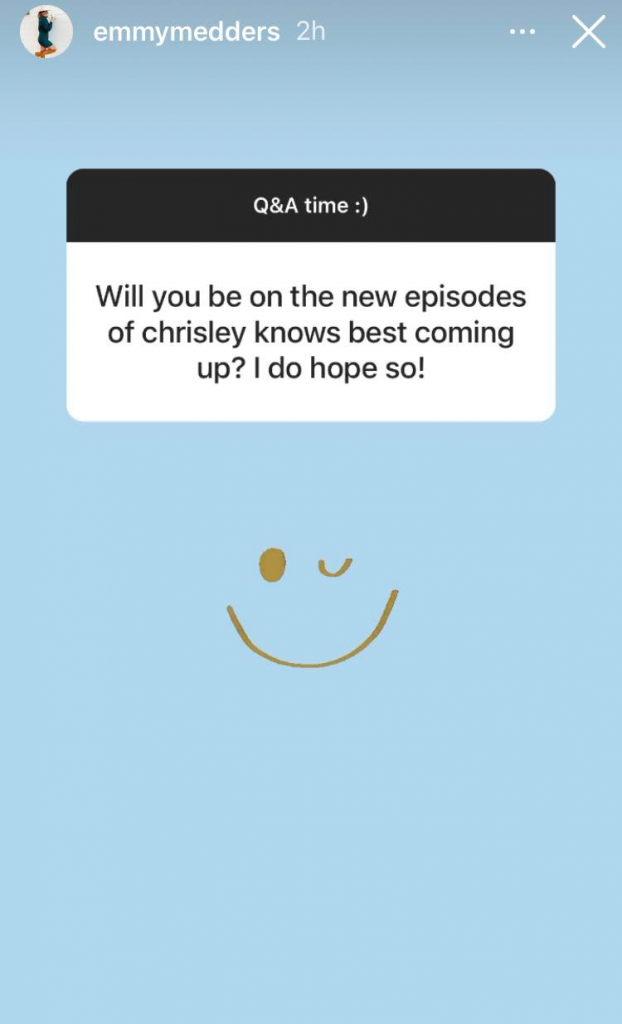 As you can see from the screenshot above, Emmy Medders responded with an animated wink face. Now, this answer doesn’t really say yes or no concretely. But, it certainly suggests fans should expect it to happen.

Things might get a little confusing for fans as Nic Kerdiles could also have appearances in the season. This largely depends on when he and Savannah broke up versus when they filmed the upcoming new episodes of Chrisley Knows Best.

The unfortunate truth is fans have to remember there is a gap between reality TV shows and what is happening in real life.

That being said, there was a period of time after they ended their engagement before they actually broke up. So, it is possible they just paused spilling the news because of the show. Likewise, it is equally possible the breakup itself could have a place in the show.

Could Nanny Faye finally get her a man?

We know Nanny Faye had expressed an interest in dating recently. We also know Chase Chrisley helped his Nanny get set up on a dating site. So, maybe we could see Nanny do a little dating this time around as well!

Either way, it certainly sounds like Emmy Medders might appear on these new episodes of Chrisley Knows Best. Fans would love the opportunity to get to know her better.