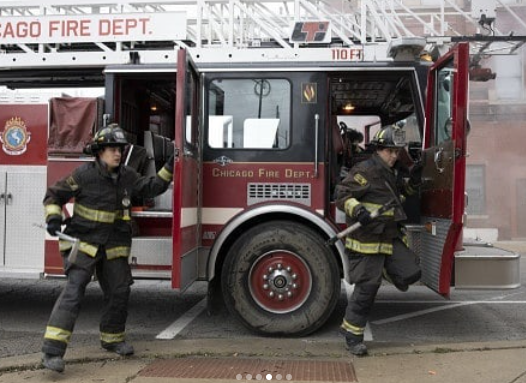 Last night was supposed to be the long-awaited end to the wait for the return of Chicago Fire, alas the wait continues. NBC announced a change in their programming plans as the events in Washington D.C. devolved. Therefore, the show will return next Wednesday, January 13. But, what can we expect for the upcoming episode?

After episode two we were left wondering about several things. What would happen between Brett and Casey? What would happen to Stella once she takes the Lieutenants exam? How would Kylie fit into the firehouse family? The trailer for episode three did not offer much in the way of answers as it focused only on five seconds of a conversation between Matt and Sylvie. But new hope is found in a recently released episode synopsis and multiple clips from the episode!

“A mishap on the aerial ladder in the midst of a fire rescue leaves Mouch shaken and questioning his abilities; Kidd looks for support from Severide while Casey and Brett discuss their future.”

What we now know

Ok, so the first big, burning question: What happens with Matt and Brett? When we left them Brettsey shared their first kiss. But it all came crashing down when Brett asked about the elephant in the room: Gabby. Matt did not have a real answer to her question. So, Sylvie asked him to leave and we were left wondering. Now, there are fans on both sides of this debate.

In the first clip that we have Matt approaching Brett and asks to talk to her. He apologizes for his awful non-answer and Brett says that the misunderstanding was her fault. But Matt quickly says both of them played a part, and he is not sorry they kissed. Brett is not so quick to agree, which worries Matt. But before she can explain, in true Chicago Fire fashion, the bells go off and we have no resolution. But with the trailer and the additional clips of Brett and Matt going to their buddies, we know that they talk at some point.

Matt and Severide have one of their cigar chats, and Matt tells him about the kiss. The news that Matt kissed Sylvie surprises Kelly. And later Brett opens up to Stella at Molly’s. Stella of course wants to know all about the kiss. Brett tells her it was a good kiss, and Stella is not at all sorry she asked. Show writer Derek Haas has said that Brettsey is not going to figure everything out in one episode. So, fans do not lose hope in your ship just yet.

Onto the other drama

The is Chicago Fire though, so of course, there is more drama. The synopsis mentions an incident with the aerial ladder that shakes Mouch’s confidence. During the “big fire rescue” of the episode Mouch operates the aerial and sets it up for Casey and Gallo. But while Casey is climbing the ladder appears to move on its own. Mouch checks the switches to see if he locked them, and when he does the ladder jerks throwing Casey over the side. No doubt this will have Mouch questioning every second of what he did operating the aerial. Herman will likely be right by his side supporting him all the way. 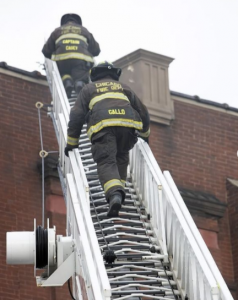 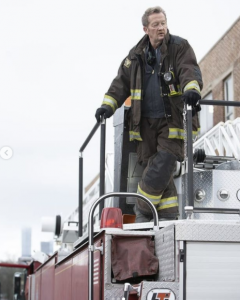 Lastly, the episode synopsis mentions Stella Kidd having a hard time and relying on Kelly for support. Is it possible another chief is going to have issues with Stella taking the test? And are the rumors possibly going to be that Stella is not qualified or that she only has the opportunity because of her relationship with Kelly?

Not so patiently waiting

Haas even explains why he named the episode “Smash Therapy”. “There’s a pretty great scene with Brett and Mackey out on a call, where the words ‘smash therapy’ are used, and Brett gets some of her stress out on the call”. Mackey sure looks to be having fun. 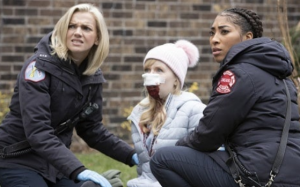 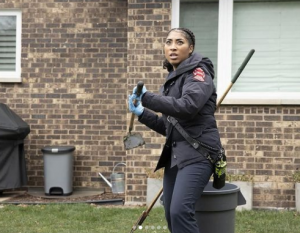