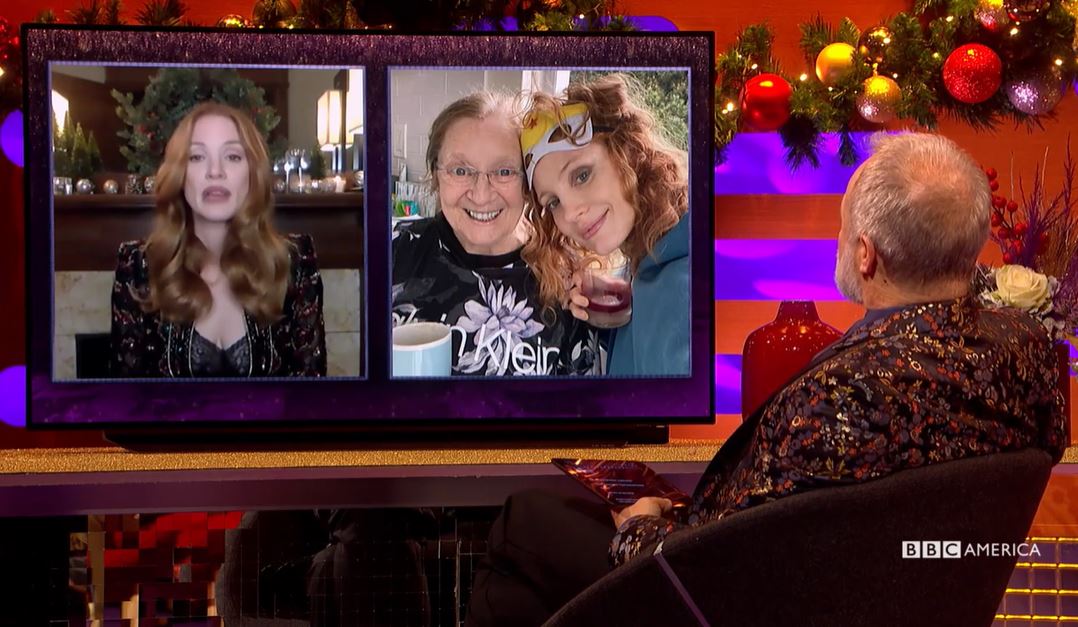 Norton’s BBC America show has a casual cocktail party vibe as the loquacious host interviews guests and supplies the wine and good cheer, all while people sit together and chat over projects, the past and anything Norton deems conversationally interesting.

If you have never watched an episode, for shame. Please see the clips below that preview the Friday night party.

About The Graham Norton Show

Airing for folks in the USA on BBC America, the BAFTA Award-winning Irish comedian Graham Norton hosts this eponymous talk show where he covers trends rumor, news and more that interest him and his guests.

Similar to American chat shows, Norton kicks it all off with a monologue and other comedy segments, which can include far fetched stories and characters, as he holds court with celebrities from both sides of the pond,

Norton interviews Chastain remotely and asks about her famous granny. He said: “But one of the perks for you in lockdown is you got to spend time with your grandmother [the] motorcycle mama?”

Chastain loves her nana and said: “She’s an amazing person and you know she spent about a month alone and starting in February and she was
starting to have weird…[she] didn’t want to be alone so I said okay come come stay with me… and so it’s been really a very, very strict household because I’m trying to keep her as safe as possible.”

Norton asked about fixing her up. He said: “So you still haven’t managed to find her a man?”

Chastain said: “She’s a total catch I mean, I was posting pictures of her like planking doing all of this exercise stuff with me it was amazing.”

Norton began to laugh at the word planking which means something quite naughty in Brit speak:

Tom talked about his horse skills and gun toting maneuvers, as he described how he rode a horse and drove a wagon with some flourish.

And Emily Blunt has a western film scheduled, and revealed she is allergic to horses. Noting his own horse called Wimpy, Hanks said: “You develop an affection for those beasts.”

Blunt shared she was practicing riding horses in England three times a week and that one particular horse, named Rusty, “did her in.”

Emily Blunt’s cringe-worthy beer fail where she ruined the exact pouring of a pint of Guinness beer netting a glass of foam: