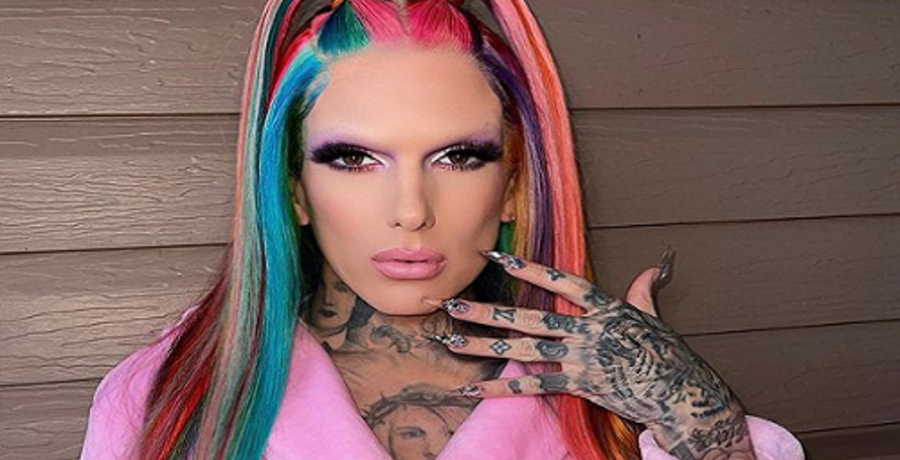 Makeup artist Jeffree Star responded to the Kanye West hookup rumors. He posted a new photo amid the rumors that he’s involved with the rapper. This stemmed from the Kim Kardashian and Kanye West divorce reports. Page Six first reported that the couple is on the brink of a divorce, while E! News and TMZ claim they’re working on their marriage.

The rumor started on TikTok on Wednesday, January 6. A popular user claimed that the divorce was caused by Kanye hooking up with Jeffree. Since then, the beauty mogul has decided to respond to the rumors. His name was trending most of the day on Wednesday.

Jeffree Star responded to the rumor that he and Kanye West are secretly hooking up. The MySpace alum took to Twitter and Instagram to post a new photo, in which he wears a rainbow wig with a hot pink robe. He added the caption: “I’m ready for Sunday Service,” which is a reference to the rapper’s popular Christian gatherings.

Jeffree currently has 17 million subscribers on YouTube. He’s also the CEO of the makeup brand Jeffree Star Cosmetics. Interestingly enough, he avoided questions about the rumor that stemmed on TikTok. Instead, he texted YouTube star Keemstar and wrote: “Hahaha” and “I’m having the best time in Wyoming, come visit sometime!”

The rumor first took place on TikTok, where a lot of crazy rumors seem to come from these days. Influencer Ava Louise claims that Kanye West cheated on his wife, Kim Kardashian, with Jeffree Star in Wyoming. Both stars currently reside there. However, there is no evidence that the two have met, let alone hooked up. Ava became popular for a viral video in which she licked an airplane’s toilet seat for what she called the “coronavirus challenge.”

Ava cited the Page Six story that reported Kim and Kanye were planning to divorce. She said it was “no surprise” because she had known “for months” that Kanye was “hooking up with a very famous beauty guru.”

“A lot of people in the scene have known for a while,” Ava said in her TikTok video.

Kanye West and Jeffree Star trend on Twitter after TikToker makes bizarre claims linking West to the controversial make-up guru as they're both staying in Wyoming.

Social media quickly took the situation and turned it into a series of memes and jokes. pic.twitter.com/36QD7QAB43

At the time, she didn’t name names. Instead, she “liked” comments that hinted it was about Jeffree. In an interview with Insider, Ava admitted there’s no “concrete evidence” for her theory. But she spoke with an entertainment lawyer in Los Angeles who claims to have provided proof of the affair.

Other TikTok users took notice of Ava’s video. It quickly spread over to Twitter, where “Jeffree” trended throughout the day alongside Kanye’s name. While this wild rumor does not make sense, fans love talking about it. Twitter users flooded the trending topic with memes and GIFs.

In the meantime, both Kim and Kanye have been quiet on social media amid the reports.

Check back with TV Shows Ace for more news on the Kanye West and Kim Kardashian divorce rumors.