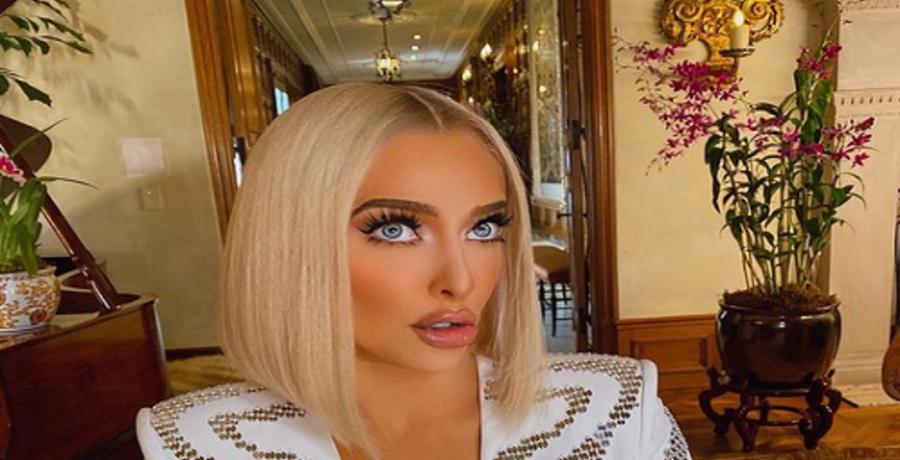 Erika Jayne wants to get back into the dating field. Stat. The Real Housewives of Beverly Hills star has been posting sexy photos on Instagram. However, it’s left a bad taste in some people’s mouths. Critics argue that Erika should focus on her embezzlement case instead of her photoshoots.

However, that hasn’t stopped the Bravo star from posting photos. Now, she’s dropping hints about online dating. This comes amid her divorce from Tom Girardi. On November 3, 2020, Erika announced she’s divorcing the attorney after 21 years of marriage. Their divorce continues to play out in the media and it hasn’t been pretty. You could say it’s a pretty mess.

The RHOBH star dropped a major hint on Instagram. On Thursday, January 7, Erika Jayne posted another dizzying photo on Instagram. She showed off her long legs in the snapshot. In the photo, she bent over in a burgundy bra and thong set. She paired the hot look with gold heels, a bangle bracelet, and voluminous hair.

Erika coyly wrote in the caption: “Thinking of making this my online dating profile pic. Thoughts??” She also included the hashtag “Savage X Ambassador.” Erika is the face for Rihanna’s Savage X lingerie line. Within two hours, the post racked up over 45,000 likes.

However, not everyone loved the sexy new photo. Some thought Erika Jayne should “read the room.” Others thought it was inappropriate. Some of her followers couldn’t help but bring up her embezzlement case. Here are just some of the comments:

One fan suggested that Erika should start her own OnlyFans account to generate some money, so she can “pay back the widows and orphans.” Edelson PC accused Erika and Tom of embezzling money meant for the families of the victims involved in a plane crash in 2018. The couple allegedly used the funds to lavish their lifestyle. The case is ongoing.

Erika Jayne continues to show some skin amid the accusations. Some fans are finding her photos “tone-deaf.” They think she should take a break from social media altogether. But Erika can’t slow down the glamour photos. Most of her Instagram feed is filled with photos of herself.

She doesn’t really share much of her life, just like on the show. So, the fans don’t really know much about her, aside from the fact that she loves glam. Erika previously shared a photo that showed her getting undressed. She continues to display her public persona without addressing what’s going in her personal life.

What do you think of Erika’s latest photo? Do you think it’s too soon for her to date? Sound off below in the comments.