Up until now, Chrisley Knows Best were unable to do a fruitful search for Emmy Medder’s birthday and age. We know she’s Chase Chrisley’s girlfriend. We know they’ve known each other for a while. And, we know she’s gorgeous. But, fans really don’t know that much about her. In fact, many fans are hoping she’ll be on the upcoming new episodes of Chrisley Knows Best. This way they can get to know Chase’s love a little better.

Perhaps she was just bored. Or, perhaps she recognizes her following as grown. And, Chrisley Knows Best fans want to know her better. So, Emmy Medders opened the flor on her Instagram Stories for a Q&A session. Unsurprisingly, fans of the series were ready and armed with questions. One fan wanted to know how old Emmy Medders was. Fortunately, Emmy Medders was happy to share her age with everyone.

Emmy Medders reveals her age and birthday with Instagram

No longer will Chrisley Knows Best fans have to wonder what Emmy Medders’ age or birthday is. She decided to share this information with us on Instagram yesterday. Turns out, Emmy Medders is 26 years old. And, she hasn’t been 26 for very long! 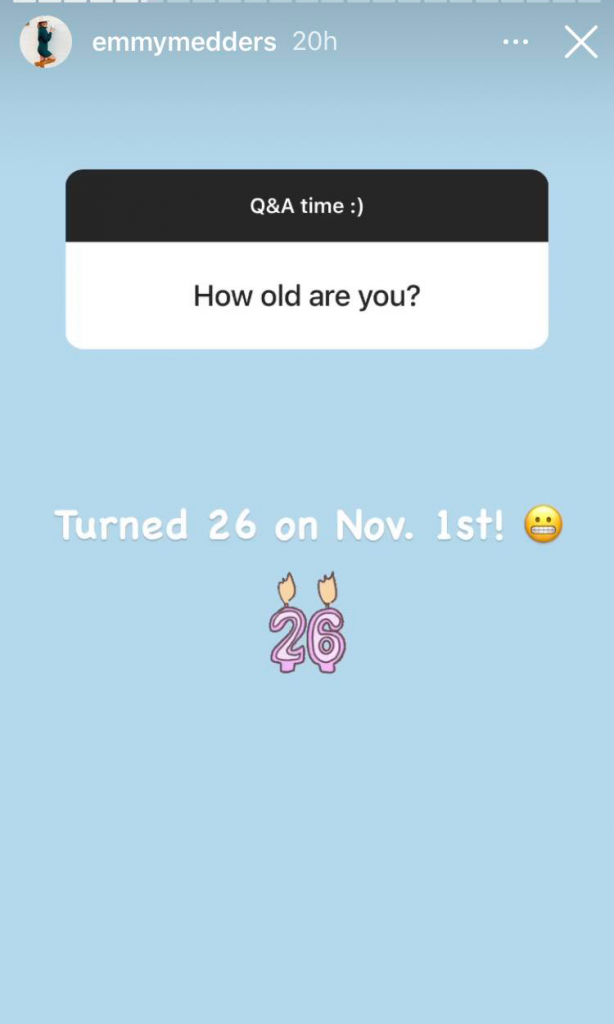 While it wasn’t included in the question, Emmy also shared her birthday with everyone. Emmy Medders turned 26 on November 1st. So, we can only assume she and Chase recently celebrated her birthday. In addition to the holidays. Here’s hoping she had a good one despite the pandemic!

Wait, how old is Chase Chrisley?

Now, age is just a number. But, for comparative purposes… We know you are probably doing the math. How old is Chase compared to his girlfriend? Turns out, Chase is actually two years older than his girlfriend Emmy. He’s currently 24 years old. And, he won’t turn 25 until June 1st. It is interesting that they share the same birth date in two different months though!

Is this “the one” for Chase Chrisley?

Fans of Chrisley Knows Best have discussed Emmy Medders being “the one” for Chase. They note she looks a lot like a younger version of his mother Julie. They also really think he and Emmy would make gorgeous babies together. Likewise, there have also been rumors that the duo were engaged. Chase and Emmy both explained the ring everyone thought they saw wasn’t actually an engagement ring. So, turns out they aren’t actually engaged. At least, not at this moment in time.

Still, Chrisley Knows Best fans are happy to get to know Emmy Medders better. And, hope they’ll see her on new episodes of the show. So, do you like knowing Emmy Medders’ age and birthday? Share your thoughts with us in the comments.

About The Brook Baker Case From ‘One Deadly Mistake’ With Spoilers
‘Days of Our Lives’: Kate Mansi Returns To Television – When and Where Revealed
Angela Deem On Screen With Man Later Charged With Murder
Dale Moss Confirms Split From Clare Crawley
‘General Hospital’ Explosive Spoilers For Thursday, January 21, 2021