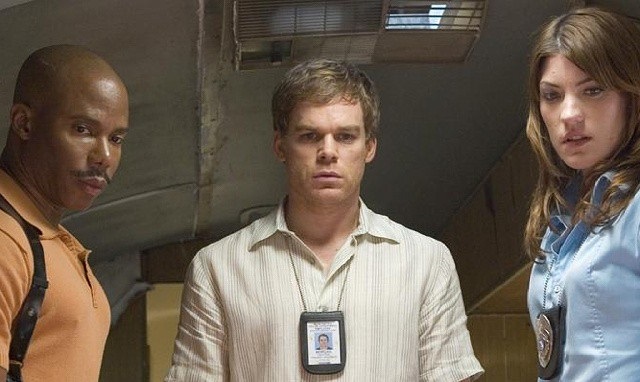 New details about the production of Showtime’s Dexter Limited Series has been revealed. According to Boston.com, the highly anticipated reboot will take place in Massachusetts. Furthermore, we know the production of the revival of the award-winning drama will start soon.

The outlet goes on to reveal the production of the limited series is set to begin toward the end of this month. A source close to the set noted the production is expected to run through the month of July.

As those who have been following the story know, it was back in October that a 10 episode limited series was ordered. Showtime plans to produce the limited series to the west of I-495. The bulk of the production will take place in local cities and towns. Some of which include Gardner, Lancaster, Sterling, and Worcester.

The production team spent nearly three months discussing filming sets across various points of Gardner. Purchasing director Joshua Cormier did confirm this particular location has worked really well with those in the film industry in the past.

The city of Gardner has always been very, very willing to work with the film industry. We’ve seen through the gamut of small and large productions, and each one provides an economic boost we wouldn’t see otherwise, which means a lot for small businesses, especially now.”

Unfortunately, the outlet was not able to reach a Showtime rep for further information.

The history of Dexter

Now, most are going to refer to this as Dexter Season 9. After all, the series originally had an eight season run. And, it lasted for 98 episodes taking place from 2006 to 2013. Michael C. Hall was the leading star of the series playing the role of Dexter Morgan. Likewise, we know he will return for the revival.

In the series finale, we know Dexter Morgan faked his own death. He left Miami and took up a job at a lumber company.

The finale of Dexter received a heavy amount of criticism. Michael C. Hall hopes the revival is a chance to redo the botched ending and give longtime fans of the series something they can really enjoy.

Fans who watched Dexter when it originally aired only hope the limited series reboot will do the first eight seasons justice. So, are you excited Dexter will return to your screen? Share your thoughts in the comments.