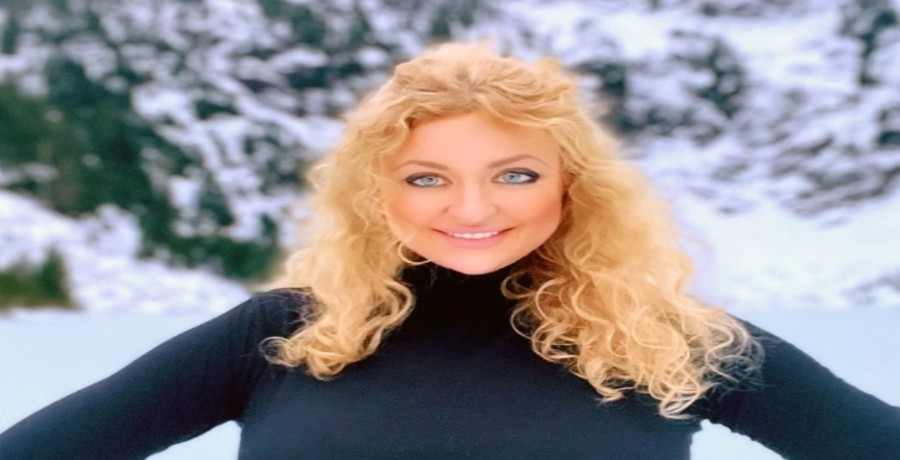 Natalie Mordovtseva added a new family member to her small brood. She shared a puppy with her followers on Instagram. At least, that’s how it seems as she poses with the cuddly pup. The curly haired reality star snuggles with a cute Husky puppy with bright blue eyes. One fan said, “wow did you get a puppy. Beautiful eyes like yours.”

She captioned the photo, “Nymeria,” with a heart emoji. Mordovtseva is happy to promote her reality show on her social media with the hashtags. She calls herself an actress, journalist, and a reality tv star in her bio. Natalie has a website linked to her Instagram with some more glamourous pictures of herself. A recent picture of Natalie had fans wondering if she grabbed some new assets for the new year as well. In the picture she has a peacock feather and said, “feels so soft on the skin.”

One fan said, “were her boobs always this big?” Another said, “somebody definitely got an enhancement.” A lot of comments complimented her and one said, “you took my breath away,” when they saw the post.

How Has The Couple Been Doing Since The Show?

Natalie Mordovtseva and Mike do have plans to get married. Screen Rant reported Natalie hasn’t gotten her engagement ring back. It seems Mike is trying to comfort her.

Natalie reportedly said she was confused and feeling sad. Fans are looking forward to learning how they’ve been doing. TV Shows Ace reported the couple was spotted filming in Seattle at Pike Place Market back in January. Discovery Plus recently released info about four spin-offs including 90 Day Bares All, The Other Way Strikes Back, and 90 Day Journey. Fans of the shows will have a lot more content to digest soon. Those familiar with Natalie and Mike’s relationship like to point out how she badgers him a lot. A Twitter fan said, “natalie from 90 day fiancé says she is vegetarian but she ordered scallops?? and then got upset that mike was eating meat?? I’m confusion.”

Natalie Mordovtseva Will Be Back On Reality Television

Natalie Mordovtseva is coming back to the small screen soon. The spinoff 90 Days Bares All is the one who will revisit Natalie’s situation. The show will catch back up with couples and show how they’ve been fairing. Natalie  and Mike will be appearing on episode three of the four episode series. The first episode of Bares aired Monday and already fans are raving about it on Twitter. One fan said the content could keep coming. They tweeted, “how many can there be?! Until every couple, or every broke up person gets their own show?”

All the spinoffs are going to stream on the Discovery Plus app. The show 90 Day Fiance will also be back with new episodes on TLC. Are you excited to see Natalie and Mike back? Which of the four spinoffs are you looking forward to the most?