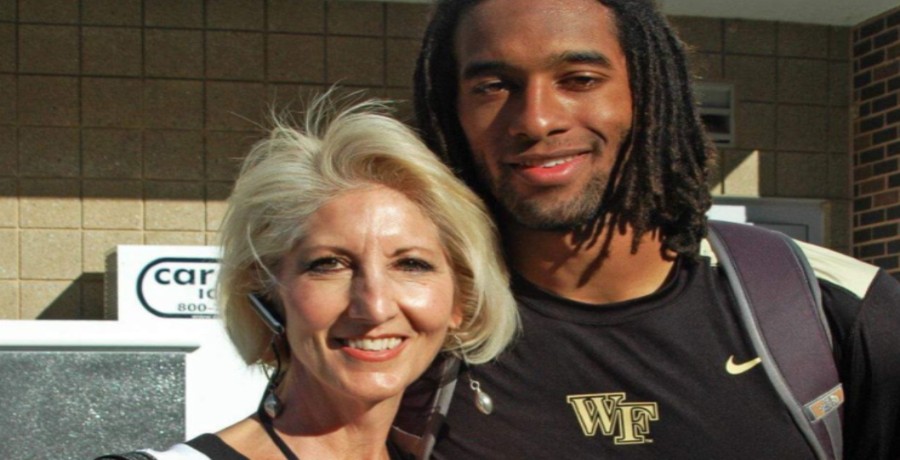 Wearing cookie socks and sweats, Matt James watched the premiere of his season with two special people. Settling in to watch him meet the women of his Bachelor season were his mom, Patty and best friend Tyler Cameron. The Bachelor has won a lot of hearts with his nervous approach to the beginning of his season. He told the women he was so glad he got to do it for the first time with all of them.

Eating hummus and crackers at home, he shared the three of them on his story and said, “the family pulled up.” Tyler wore his usual uniform of a white tee and shorts. Patty, always chic, wore a cute sweater with hearts on it. Matt captioned the photo, “we’re live! Welcome to my family, excited to raise money for the @ljfamfoundation funding @ipromiseschool.” But Patty James seems to be the one in the family getting all the social media love.

Why Did Matt James Mom Get All The Attention?

Matt James shared a picture with his mom outside of BobWhite kissing sandwiches. It’s clear on both Instagram and Twitter, fans love his mom. Patty drew instant attention when she showed up in those leather pants. One photo posted to Twitter fans praised her a lot.

Matt James watching his own season with his mom is everything #TheBachelor pic.twitter.com/zojLz2Jb4P

One fan said, “as the old saying goes ;a man will pick a queen similar to his mother.. looks and ALL.” Fans think his relationship with his mother will directly affect who he picks as the winner. Another said, “Patty is the best! I enjoy her enthusiasm for life.” One commenter said whoever wins better have excellent fashion sense. They compared Patty to Glenn Close’s character in The Devil Wears Prada.

One fan commented on Matt James Instagram post saying, “I hope you are spending quality time with your amazing mum.” Other fans wanted to know who was taking the picture, because they wanted to know if it was a lady. It’s doubtful the lady who won would be out with them currently. It probably was Tyler Cameron.

One fan praised Matt, because of the job he did in the premiere. They said, “my money is on Matt. I have every confidence he will identify the absolute best human from that incredible group and she will be smitten. I hope you choose who you want to choose and not let society or the producers steer you in any particular direction. You did a great job on night one.” Matt James appeared on Good Morning America and talked about cleaning his blender. He cut his finger. People responded saying he’s just so relatable.

The Bachelor will continue next Monday night on ABC. Is Patty James your favorite Bachelor mom? Do you think she’ll be as vocal as Peter Weber’s mom? Sound off below with your thoughts!

‘Bold And The Beautiful’ WOW! Finn’s Bio Mom Is A Forrester?
OMG!! Did Meri Brown Admit Her Husband Kody ABUSED Her?!
‘LPBW’ Tough Jackson Roloff Shows Dad What He Is Made Of
Blayke Busby: Actress? See The Tween’s Stage Debut At Summer Theater Camp
Chelsea Houska Catches Heat For Editing Photos Of Her Children