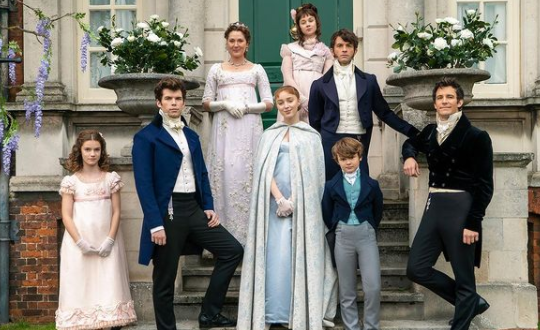 Hello dear reader, let me start this review by saying that I liked the Netflix series Bridgerton very much. I had some issues with the series because the truth is no one is going to like absolutely everything. The true success of this show is that it made me want to read the novels it was based on. Now, I will say that I am a massive fan of Regency period novels. I love everything from Jane Austen to Eloisa James, and now, Julia Quinn has joined their ranks. So, thank you Shondaland and Netflix for that. But, now as a fan of the books, I must say that I disapprove of several artistic choices made by the show creators.

I appreciate artistic license and understand that it’s impossible to follow the source material verbatim when translating into media. But my allowances only go so far. There have been excellent book adaptations, the first Harry Potter movies for example. Although, the later movies leave a lot to be desired from a reader’s perspective. But all in all, the movies stayed true to the source material, which is all I ask. But some things are “beyond the pale,” for those of you who are not Regency fans – it’s completely inexcusable.

I will be the first to say that I have no issue with the casting choices. I loved Regé-Jean Page as Simon Basset. He brought an emotional depth and complexity to the character that was exceptional. Furthermore, I do not think there could have been a more perfect casting for Lady Danbury than Adjoa Andoh. That woman brought this character to life for me in such a way that reading about her in the series was even more fun. But as I read the novels, the changes to core principles of the other characters were just unacceptable to me. And I honestly do not know how the writers will be able to redeem the characters based on the trajectory they now have them on. 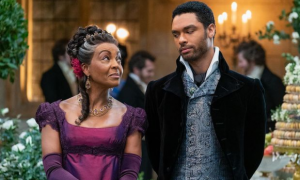 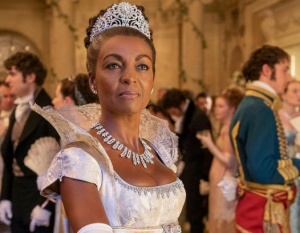 Take Daphne Bridgerton for instance. In the novel, she is a charming, funny, and inviting character that you want to have as a friend. But in the series, by comparison, she comes off as a bit vapid and whiney. In the novels, she is not the great beauty as she is in the series, and she is not as desperate to make an immediate match as her Netflix counterpart. 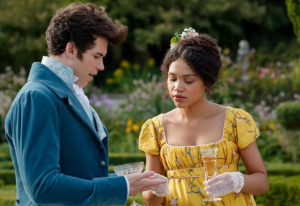 Another character that the series did an injustice to is Colin Bridgerton. In the books, Colin is cheeky, charming, riotously funny and a bit of an instigator; which all appear in the show. But what they leave out in the show Bridgerton is that Colin is also smart, intuitive, and uninterested in marriage. The show makes him the simpering fool by having him become obsessed with Marina Thompson. In doing this the show creators removed Colin’s innate perceptiveness and turn him into a lovesick puppy for the sake of a created storyline.

Another character that the series has almost destroyed for me is Penelope Featherington.

Penelope is shown as a naïve, kind-hearted girl that is unassuming and generous. All of these things are present in the novels as well as the series, but things change because of the same storyline that causes the show creators to hurt Colin. In the novels Penelope is revealed to be Lady Whistledown, the gossip columnist, but not until the fourth book (way to blow the suspense writers!!). 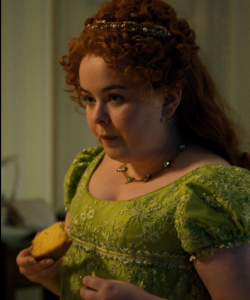 But throughout her time as Whistledown, Penelope was never cruel or abusive with the influence of the column. In the novels, Whistledown only insults those that need to be taken down a peg or two. She never goes after people that could be hurt by her commentary.

Marina is pregnant, and in her desperation to marry she chooses to exploit Colin Bridgerton’s affection for her and they get engaged. Penelope loves Colin so as Whistledown she exposes Marina’s pregnancy, effectively ending the engagement but also destroying Marina’s reputation and ruining her. Penelope and Marina are friends and this betrayal is a vindictive and cruel abuse of power. With this decision, the writers made Penelope almost irredeemable. 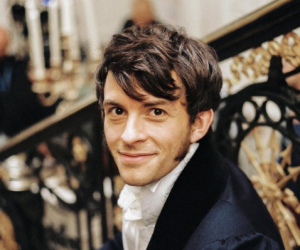 But the character that the show truly did the greatest injustice to was Anthony. In the novels, he is a decisive, protective brother, and a strong, proud leader of the Bridgerton family. The show makes Anthony an obstinate know-it-all and a lazy lord that wants nothing more than to rid himself of the responsibilities of his title and being the head of his family. In the show his relationship with his mistress makes him neglect his responsibilities to his sister. He becomes so desperate to be with his mistress that he is willing to give up his family entirely at one point. This is not in any way the case when it comes to the novels.

In the book, Anthony looked up to his father so much that his primary goal in life is to be as good a man as his father. He would never have ignored his responsibilities or given up his family for anything. Furthermore, he never would have ignored Daphne’s wishes or concerns when it came to marriage. In the show, Anthony believes he knows what is best so he engages Daphne to a man against her will. He does this because he just wants to be done with the responsibility of marrying her off. This is such a betrayal of who he is as a character that I was furious.

While changing some characters is detrimental to the whole, as listed above, other changes are welcome and necessary. Bridgerton writers needed a villain for the series, and who better than a “rival” suitor for Daphne? Nigel Berbrooke was a throw-away character that proposes in the novel, so making him into the antagonist for the show was a brilliant choice. Further, the show also needed an instigator, so creating the character of Queen Charlotte was a wonderful and funny addition. Finally, our hero needed a push to accept his feelings for Daphne, so enter Prince Fredrick. Fredrick was a sweet, humble man that caused Simon Basset to act on his feelings for Daphne and lead our characters into the final half of the series. 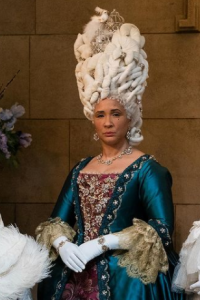 All these additions or alterations were excellent choices by the writers and I applaud their ingenuity. I found one storyline however to be extremely detrimental.

A great addition but a bad decision

Marina Thompson is a character from a later novel, and her storyline is used to highlight a particular downfall of the Regency period. Marina becomes pregnant out of wedlock and it shows the desperation that a lady of the time faced. She was “ruined” and therefore unmarriable. She had no prospects, no options except for manipulation and deceit in order to protect herself and her child. Her actions and attitude throughout the series give weight to a smaller novel character, and I liked the take on her situation for the show. 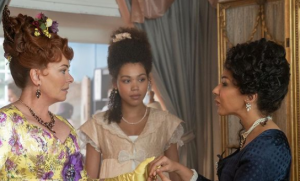 But her attempts to stay faithful to the man she loves, her manipulation of Colin, and her cruelty toward Penelope in my opinion lead to the undermining of one character and the destruction of another. Penelope and Colin become a couple in a later novel. But once Colin finds out that Penelope as Whistledown publicly exposed and ruined Marina. I do not know how he will be able to forgive her.

I am of the firm belief that shows and movies based on a book need a person that reviews the screenplays just as a fan of the novels. This person’s sole job will be to make course corrections where necessary to prevent fatalistic mistakes to the story. If the authors aren’t going to do it for their own work then someone needs to. Hollywood will never create this position though because our screenwriters and directors do not like being contradicted. So, unfortunately, book lovers will continue to suffer through changes in beloved characters.

Netflix has yet to confirm a second season for Bridgerton. But with the wild success the show has received thus far, I find it hard to believe it won’t happen. After all, there are seven other Bridgerton siblings, and they deserve to have their stories told. I like the series. I appreciate the show for what it is, and I hope it will be renewed for another season. But the show creators will need to do some serious work to rectify the damage that was done. To borrow from Eloise Bridgerton hopefully they “will be able to put right what [they] botched this season.”