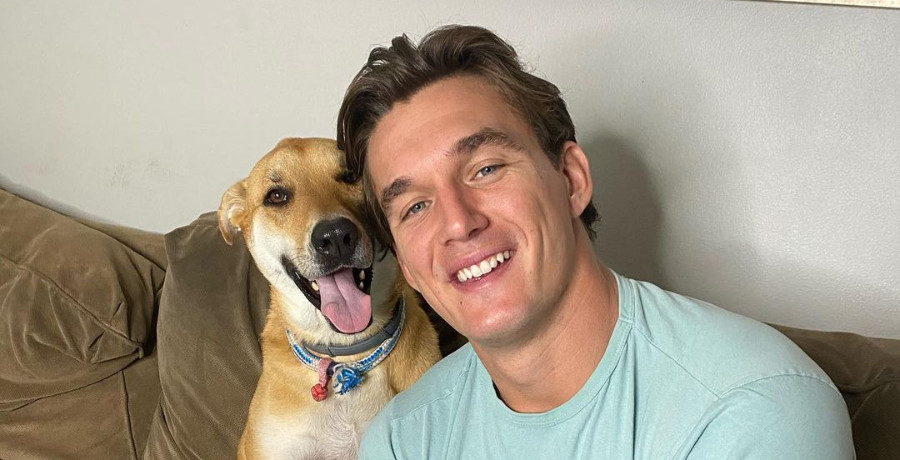 Some poor social media intern is red with embarrassment after a serious case of mistaken identity. On January 5, E! Online thought they had the scoop about Bachelor alum Tyler Cameron’s new lady love. But oops! Not so fast! Bachelor Nation spoiler extraordinaire Reality Steve quickly shut down the rumors by pointing out that the woman in the photo was someone else entirely.

So, who is Tyler Cameron dating on the down-low?

Tyler Cameron’s post-Bachelor love life is of high interest to many reality TV junkies. Especially after he spent some of the pandemic quarantined with former flame Hannah Brown. Tyler/Hannah shippers were heartbroken to find that the two are just friends So, any paparazzi shots of Tyler and a potential new love interest are a hot commodity.

But it seems that E! Online jumped the gun a bit when they posted an article with snapshots of Tyler Cameron and “Ireland Borba” spending time together in New York City. The former Bachelor lead is in NYC to support his friend, Matt James, for the premiere of James’ season of The Bachelor earlier this week.

In fact, a source told the outlet that “Ireland” visited Tyler at the NYC apartment he shared with Matt James.

In several photos of Tyler Cameron and the mystery woman, he is wearing a mask the whole time, but hers is both on-and-off her face in different photos.

Bachelor blogger Reality Steve saw the photos and expressed his complete confusion. That doesn’t look like Ireland Borba to him, he said.

Within minutes, Reality Steve recognized the girl in the photos with Tyler Cameron. But the girl he saw he saw was not Ireland Borba. In fact, he retweeted E! Online’s own article with the caption, “Ummmm, are they sure that’s her?” 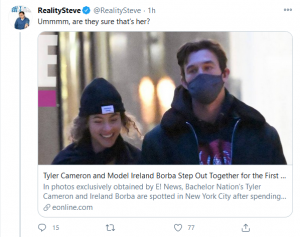 He followed that up with a long explanation. According to Reality Steve, he’s seen several photos on Tyler Cameron’s IG over the last few months and it wasn’t Ireland Borba. Instead, he identified the woman as Camila Kendra.

At the end of his tweet, Reality Steve predicted a headline change and a correction. He was half right.

Reality Steve’s tweet clearly came to E! Online‘s attention very quickly. Within 30 minutes, the outlet had changed all the headlines to correctly identify the woman as Camila Kendra. The updated article included this correction: “This story originally identified Camila as Ireland Baldwin as the woman in photos. It has since been corrected.”