Cats out of the bag folks — Kim Kardashian and Kanye West have officially split. And, those divorce rumors swirling among fans? Well, they are not rumors anymore. E! News took to Instagram an hour ago to confirm the end of the marriage.

Now, we previously reported fans had some mixed feelings about the news. Relief. Devastation. Surprise. One Kardashian fan, however, took a moment to praise Kim. Why? Well, they thought she did an incredible job of genuinely trying to make the marriage with Kanye work. This reaction to news of the divorce on Instagram has been liked over 4,000 times. So, clearly, this is something a lot of people agree with.

One fan applauds Kardashian for giving the marriage her all.

“I’ll give credit where it’s due. Kim has seemed to genuinely try to make things work with him. He just seems to be the type of person that can’t acknowledge when he needs help,” one Kardashian fan penned. 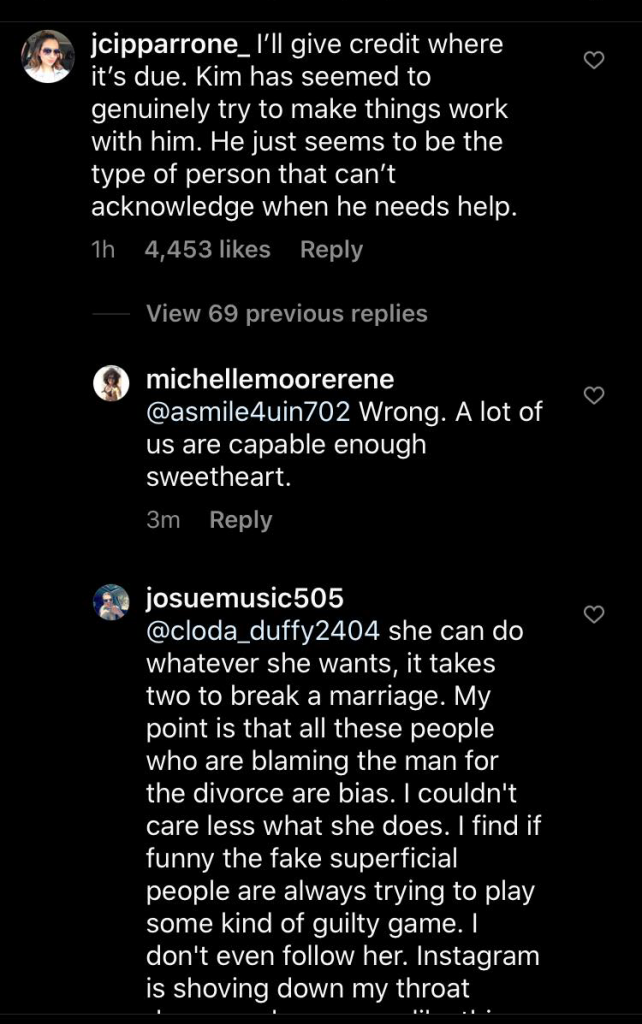 The individual above suggests the marriage must’ve failed because Kanye needs treatment. Treatment he refused to get. Likewise, other fans admit they were surprised the marriage lasted as long as it did. Some were happy to see Kim Kardashian getting out of what is perceived as an unhealthy relationship.

In one comment, a Kardashian fan notes this is the least shocking news “ever.” Others responded to the comment noting it was the “best comment” in the comment section. In the same realm of feelings — some were just surprised the divorce took so long.

The question is: what do you think about Kim Kardashian and Kanye West splitting? Share your thoughts with us in the comments.