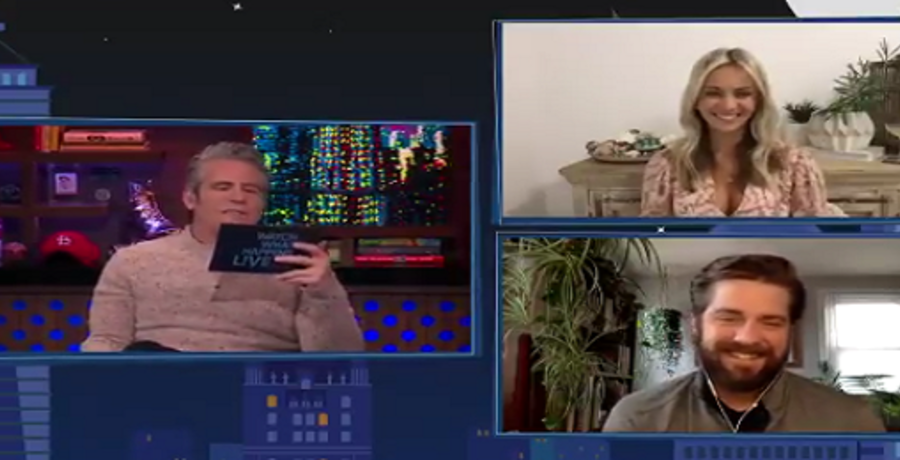 Last month, Below Deck fans buzzed over Ashling Lorger’s photo with Eddie Lucas. They thought the two should date. The yachties made an appearance on Watch What Happens Live with Andy Cohen. While the host didn’t address that photo, he did notice chemistry between the two.

He decided to stir the pot a little. The Bravo executive read a fan question. Then, he decided to ask the duo about the romance rumors. The fan wanted to make Eddie and Ashling feel awkward by noting how “cute” they look together.

That statement had both stars seeing red. Read on to see what they have to say about the romance rumors.

Did Eddie and Ashling get romantic?

During the Monday, January 4 episode of WWHL, host Andy Cohen asked a viewer question. He enjoyed reading what the Below Deck fan wrote.

“I don’t want this to get awkward, but actually, I love when things get awkward,” Andy said before reading the tweet from the viewer. “I don’t know about anyone else, but I think Eddie and Ashling would make a really cute couple.”

Ashling and Eddie had a good giggle over the question. Ashling had a feeling they would get asked this question.

“I knew this was coming!” she exclaimed. “Yeah, we would be cute. Don’t you think, Eddie?”

“So cute. The cutest,” he said with a smile on his face. He admitted that he would date Ashling if geography wasn’t an issue.

“Too bad you’re in Australia,” he added.

“I know. So far away,” Ashling responded. “I just don’t think it would ever work because we are just too far away.”

Andy didn’t let the two off so easily. He wanted to know if there anything happened between them when they worked together on Season 8.

“Was there a moment on the boat where you were like, hmm?” he asked.

“I don’t think so,” Eddie said. “I think we were just good friends the whole time.”

What do Below Deck fans think?

Of course, the Watch What Happens Live Twitter account captured the moment and shared it shortly after the show. It included the question: “Do you think #BelowDeck crew members @AshlingLorger and Eddie Lucas should date?” Surprisingly, fans were mixed.

“They have chemistry,” one fan said.

“I like both of them, but not as a couple,” a second wrote.

Another Below Deck fan had another idea. “No, I think Ashling & @ColinMacyOToole would make a cuter couple!” the fan referred to the Below Deck Mediterranean alum and fan-favorite.

Others noticed how flirtatious the couple appeared on the show. But some disagreed and think they make better friends. It doesn’t look like a romance is in the cards. As fans know, boatmances rarely work.

It’s best to not mix business with pleasure. Both Ashling and Eddie denied the romance rumors before on Instagram. They made it clear that they’re just good friends. What are your thoughts? Sound off below.