A nervous Danielle Busby hesitantly took to Instagram to offer a health update. This update followers her trip to the emergency room before Thanksgiving.

The OutDaughtered mother has had a ton of testing done since back in November. She explains she’s met with multiple doctors trying to figure out exactly what was wrong with her.

I was led to the care of a Cardiologist and Rhemotologist, who have both been amazing. Lots of tests have been done for both doctors… some results have come back ok, and some… not so much. So today… I’m doing pre op for a more intense test for tomorrow.”

Unfortunately, it does not sound like Danielle Busby is doing better. This is despite the super mom and super wife appearance she has on Instagram. It, however, does sound like a few specialists are slowly moving in the right direction. Likewise, it sounds like she’s gearing up for a more invasive testing procedure tomorrow.

Now, it was on her Instagram Stories that she shared this information. And, she did so by attaching a photo of her arm. Noticeably, she was wearing a hospital bracelet. For her own safety, she had most of her identification information scribbled out in green on the photo. 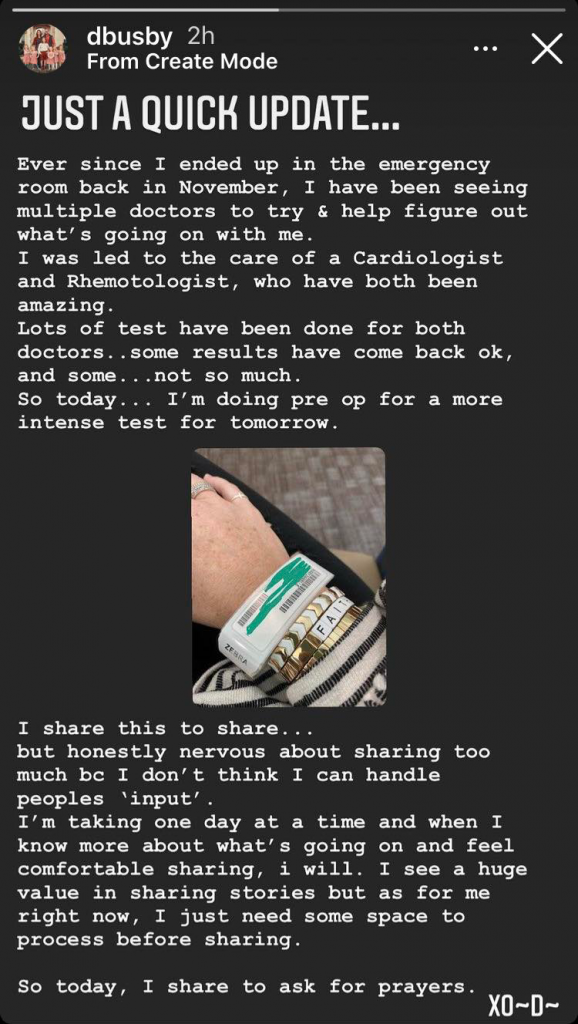 This OutDaughtered mother is both scared and nervous

Now, Danielle Busby admits she didn’t have to give this health update for fans. But, she decided to share anyway. That being said, sharing this update has made her nervous. Why? Well, mostly because she does NOT want input from any of her fans. She admits that she isn’t sure she can handle another round of fans guessing what might be wrong with her from her couch.

I’m taking one day at a time and when I know more about what’s going on and feel comfortable sharing, I will. I see a huge value in sharing stories but as for me right now, I just need some space to process before sharing. So today, I share to ask you for prayers.”

Danielle Busby ended her Instagram Stories update with “hugs and kisses.” Given the fact that she doesn’t want any input from fans, it makes sense why she decided not to post the update on her profile.

Still, OutDaughtered fans everywhere have been chomping at the bit for an update about her health. Unfortunately, this particular update probably isn’t going to calm the fan base any.

Danielle Busby Won’t Be Caged By An Illness Or Pandemic

For now, all we can do is hope the specialists are able to figure something out. Likewise, we can pray for her.