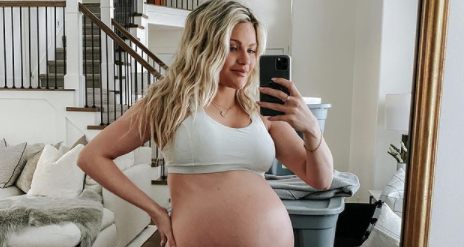 If you missed Witney Carson on Dancing With The Stars this season, she had a good reason for missing out. The 27-year-old dancer was pregnant with her first child. She announced her pregnancy back in July and did some quick math. She knew she would have a big belly by the time the season premiered and made the choice to sit out.

And on sometime in the past day, she welcomed a son with her husband, Carson McAllister. It seems that she gave birth on January 4, but that is yet to be confirmed. We also don’t know the baby’s name yet, but mother and baby seem to be doing just fine. Witney will likely make an announcement once she and her husband have had time to enjoy their new baby.

“After a really hard 24 hour labor, and an unexpected c-section… we are all healthy and well. We are so grateful & we’ve been soaking up every moment with our perfect angel boy. Thank you for all the prayers! 🤍” Witney captioned an Instagram photo. 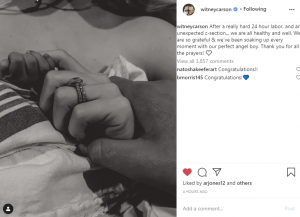 It was definitely a big year for Dancing With The Stars babies. Artem Chigvintsev and Nikki Bella welcomed a son over the summer. Witney’s best friend and fellow pro dancer Lindsay Arnold had a daughter in November. Fans expressed joking comments that Lindsay and Witney’s children may even grow up and get married someday.

“It’s actually insane. We’ve done so many things in our lives together, so it’s like, naturally, why wouldn’t we get pregnant together?” Lindsay told ET while the two were both pregnant. “It’s so funny because you can’t really plan a pregnancy. I mean, you can plan when you want to try, but it’s not like it’s always going to happen when you want it to.”

A New Generation Of Dancers

“We’re gonna take turns with daycare,” Witney added in the interview. “Like, Lindsay, you take them once a week, me once a week. And we’ll sneak in some dance lessons there, in daycare.”

“Yes, and it’s perfect we have a boy and a girl,” Lindsay continued. “I feel like it’ll be good because boy and girl friend relationships are so much fun. They can be partners, maybe girlfriend, boyfriend, who knows.”

Who do you think the next DWTS pro to have a baby will be? Val Chmerkovskiy and Jenna Johnson could very well be next. Jenna is good friends with Lindsay and Witney and reportedly has baby fever.

If you haven’t already, be sure to visit Witney Carson’s Instagram page and stay tuned for more information.