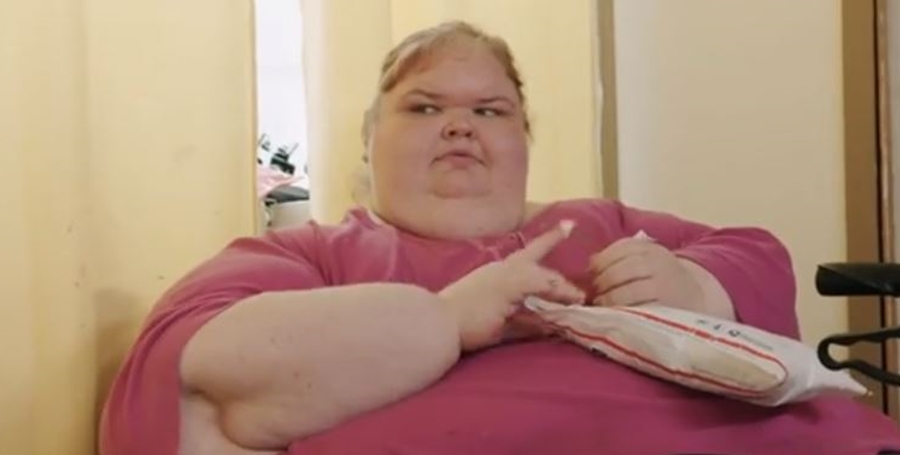 1000-LB Sisters premiered on January 4 and Tammy and Amy fans reacted with shock. Not so much to Amy, but to Tammy. Sadly, they saw that spoilers that put all her weight back on predicted the truth. Actually, fans simply can’t get over how large she is. But, they don’t feel all that sorry for her. In fact, a lot of them slammed her for not taking responsibility for her own demise.

We reported that Amy suffered from constipation so she went off the see the doctor. Well, surprise! She was pregnant. But when she broke the news to Tammy, Tammy became angry. She claimed that she only wished the doctor was “lying” because she knew that Amy fell pregnant before the doctor recommended it. But in the episode on Monday night, critics thought she just hated the idea of Amy being able to focus on someone other than her. She actually called her married boyfriend Jerry Sykes, saying she couldn’t stand the idea of Amy & her husband having a baby.

After all, she now needs to move as there’s no space. One Twitter critic wrote, “tam’s pouting face when amy talks about getting a bigger place.” And another one noted, “Ewww Tammy is so nasty. Did she say I wish he was lying to you knowing she’s been wanting a baby?!?” Actually, while fans think Tammy just hates the idea of the baby getting all the attention, 1000-LB Sisters fans think it’s time she started doing things for herself. And they slammed Tammy during the premiere.

As soon as you start telling Tammy to grow up and get her things together she shuts down she doesn’t wanna hear it. It’s the world against Tammy apparently 🤦‍♀️ #1000lbSisters pic.twitter.com/QjmwEG0CTx

Tammy slammed for not making an effort in the premiere episode

Apart from her anger that her sister fell pregnant, fans hate the way Tammy blames Amy for everything. It seems that she won’t take responsibility for her own actions. She claimed that Amy does nothing to help her. But, actually, as one fan noted, “Tammys like “the only thing amy does for me is MY LAUNDRY COOKS ME FOOD AND TAKES OF MY GARBAGE AND BUYS ME GROCERIES THATS IT.” basically she’s keeping u alive and your not gonna survive without her .”

The brother of the 1000-LB Sisters stars also carries a lot of weight. And at 400lbs, he could use some dieting as well. So fans felt happy that he said he’ll mentor Tammy. But, they held an intervention that ironically involved a BBQ. As one fan said about the premiere, “I feel like I’m watching a suicide in slow motion.”

Here we go! Everyone cares about Tammy but Tammy, and she believes everyone is attacking her when they truly care and are concerned. #1000lbSisters

It seems like fans became genuinely scared for Tammy in the premiere. And much of the trolling comes from that. It seems motivated by the scary thought that she might soon die from ill-health. Instead of lying around moaning that nobody cares and nobody helps, fans of the TLC show just want her to get serious about saving herself.