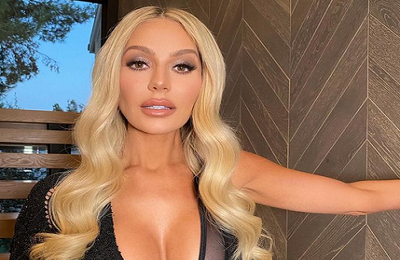 Dorit Kemsley is sounding off on the Hilaria Baldwin drama. Last month, Alec Baldwin’s wife addressed the fake accent accusations on Instagram. She admitted that she was born in Boston, Massachusetts, not Spain and that her real name is Hillary. The drama has since gone viral on social media.

Most celebrities have shared their reaction. However, there has been none other like comedian Amy Schumer, who willingly mocked the yoga aficionado on social media. Now, the Real Housewives of Beverly Hills star is sharing her input. In a post via her Instagram Stories, Dorit admitted that she feels bad for Hilaria. She also lent her support.

Dorit Kemsley is coming to Hilaria’s support amid the controversy. The 44-year-old took to her Instagram Stories on Saturday, January 2. The Bravo star said she felt “bad” for the 36-year-old influencer. Dorit shared her thoughts during an Instagram Q&A. She asked fans and followers for the “trolling and bullying” to come to a stop.

“I feel bad for what she’s going through in the press at the moment,” she wrote in response to a follower who asked her about “accentgate.”

“I don’t think she deserves it. I’ve had so much scrutiny over the way I speak, I’ve learned to ignore all the noise but at first, it was really hurtful,” Dorit continued. “I’m sure all of this backlash has been hard on her. I don’t know her but I’ve followed her for years and I hope she’s back on social media soon. … If you have nothing nice to say, don’t say anything at all.”

Dorit hails from Connecticut. However, she has been questioned for her accent, which she debuted on RHOBH in 2017. Fans noticed whenever she spoke with a slight British accent. Dorit even had to address the accusations that she fakes her own accent.

In an interview with BravoTV’s The Daily Dish, Dorit Kemsley claims that it’s just her voice. She picked up different accents along the way. Dorit also claimed that she was inspired by her husband, PK. But that hasn’t stopped fans from picking on her.

“I think the way I speak is probably a combination of many things. First and foremost, I am married to a Brit [Paul Kemsley] who’s got a very, very strong London accent, and I’m sure some of his inflections have sort of rolled over on me,” Dorit said at the time. “My parents are not American. I was born and raised in America. I did spend a significant amount of time, nearly 10 years, back and forth going to Europe, I spent a lot of time working all over the world and in various places of the world where people didn’t speak English that well.”

Dorit’s accent has been the center of conversation ever since she joined The Real Housewives of Beverly Hills. Despite her claims, fans don’t think that her accent is real. Both of her fellow castmates, Erika Jayne and Teddi Mellencamp defended Dorit and claimed that her accent is real. Even with the backlash, some of the cast believe her when it comes to her accent.

What are your thoughts? Sound off below.