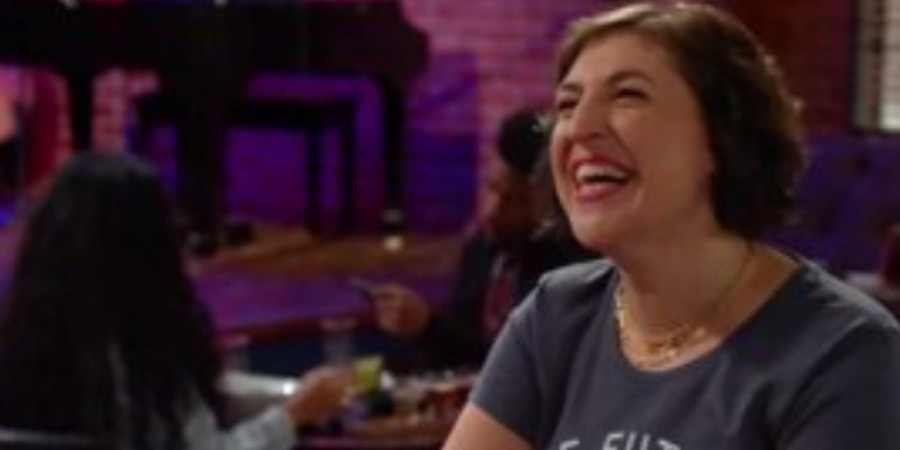 Call Me Kat is the new FOX series from The Big Bang Theory stars Jim Parsons and Mayim Bialik. Bialik stars in the titular role of Kat, a former professor who goes on to open a cat cafe. Starring alongside are Cheyenne Jackson, Leslie Jordan, and Swoosie Kurtz. Let’s get to know Kat and all her friends!

This is a sitcom where the lead speaks to the audience. So, it feels like Kat (Bialik) is talking directly to fans.

Her father sadly passes away. Kat’s mom, Sheila, says she wants to sleep forever but Kat has other plans. She says she wants to open a cat cafe. Currently, she works as a math professor. But, it is unfulfilling. At the same time she is living her dream, her mom has news. Kat’s friend, Tara is having a vow renewal. Sheila thinks Kat will be devastated since she is 39 and hasn’t been married once.

At the cat cafe, her invitation to the ceremony arrives. She gets to bring a plus one and this is where we meet Phil (Jordan) and Randi (Kyla Pratt). Both are friends and employees. When Phil hears where the reception will be, he recalls how he and his ex were supposed to go a work party there. Elizabeth Taylor lost an emerald at this hotel once. Kat asks him to be her date so he goes to call and tell his mama. After work, she goes to a bar where she reconnects with hot Max (Cheyenne Jackson) from college. She’s there to chat with Tara about the wedding and tells Max she has kids and is married. Kat has bad social anxiety. So, she quickly retracts her story when Max tells her he is single.

Tara is so excited to meet Kat’s date, Phil. Unfortunately, she is less than thrilled to find out he is just the baker at the Cat Cafe. A date has to be someone you’ve been dating awhile, preferably four months or so. The ballroom is very expensive; she’s been planning this event since her honeymoon. Now, Kat needs to find a new date. She also needs to find a new outfit, according to Tara. Her friend does not want to see her in her favorite green pantsuit again. When Kat goes to tell Phil he can’t come, he senses it and says how excited he is. She won’t break his heart so she tells Tara they are a couple.

At the wedding, Phil and Kat are the life of the party. But, Sheila wants to know what he is doing there. Kat says he is her boyfriend; a boy who is her friend, if anyone asks. Sheila says Kat is drinking too much and champagne spills on the green pantsuit. Max suddenly shows up as he was friends with the groom. He had been overseas teaching English. Max met a girl but they broke up so he came home and is taking some time. Tara confronts Kat when Max walks away and says she knows Phil is not her boyfriend. They go back and forth and Kat says she will gladly pay for Phil’s meal.

Phil apologizes for causing a rift between Kat and Tara but Kat says she wanted to take him. She wanted someone she could gossip with. He tells her Tara would probably love to be alone for a day. She has three kids and a loud husband so Kat’s life would be a welcomed change. Kat runs out to make amends with Tara before she leaves for her honeymoon.

Call Me Kat’s Mama Is Crazy…

At the Cat Cafe, Phil is so excited when his mother calls. He can’t wait to tell her about the wedding. Randi says Kat did a really nice thing. Kat goes to bring a cat upstairs and her mom is sitting there, in the pitch black, waiting for her. She asks why Kat pretended Phil was her boyfriend; Sheila had friends at that wedding. Her mom is just worried she won’t meet someone and will end up a sad cat lady. Kat goes on and quotes Katy Perry’s Firework since that’s what they named their latest stray. She starts singing all around until a man tells her to be quiet.

What did you think of the series premiere of Call Me Kat?  You can catch it on its regular day and time, Thursday nights at 9pm, only on FOX.