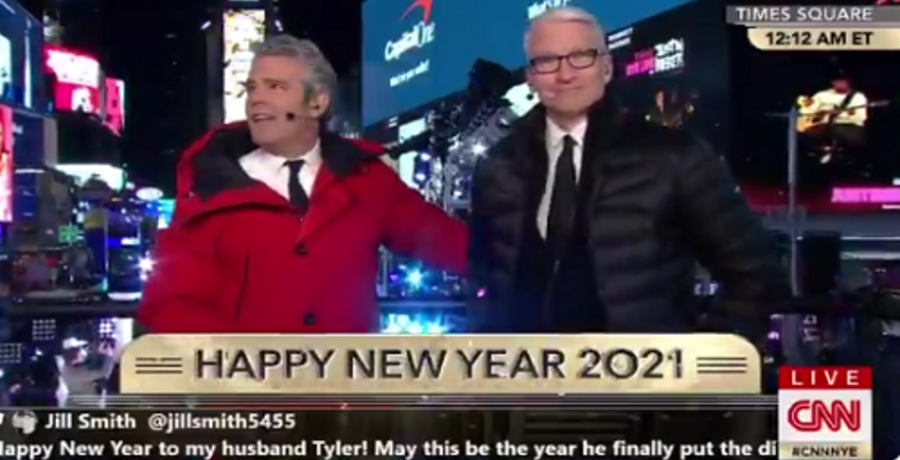 The Bravo EP joined the network’s journalist for CNN’s Time Square holiday coverage. During the broadcast, the co-hosts took shots every hour, on the hour. Cohen got a shot of liquid courage. He decided to blast the NYC Mayor. When he took a shot of tequila during the live telecast, Cohen decided to throw some shade at de Blasio.

The Real Housewives host got shady after taking a shot of tequila. Andy Cohen and Anderson Cooper had a little too much fun during the show. They drank plenty of shots and had some meme-able moments. Cohen even got his final thoughts in about Mayor Bill de Blasio.

“Do something with this city!” Cohen shouted into the camera shortly after CNN aired some footage of de Blasio dancing in Times Square with his wife, Chirlane McCray.

“Honestly, get it together!” he demanded.

Anderson, who’s not a regular drinker, cringed after taking a shot of tequila. Cohen decided it was a good time to call out de Blasio.

Anderson hated the first shot of the new year and Andy used the opportunity to rip de Blasio pic.twitter.com/59Myg6K7ud

“That’s how I felt when I saw Mayor De Blasio dancing just now,” he continued. “I just don’t need to see that at the beginning of 2021.”

Per Page Six, Cohen resides in the West Village. He then added that he would be “tiptoeing back to the Bravo in about 20 minutes,” but revealed that he has “some other stuff” he wanted to address since he had the “platform” to do so.

“You’re that guy in the bar,” Cohen went on. However, Cooper placed his hand on Cohen’s shoulder in an attempt to calm him down.

Meanwhile, De Blasio seems unfazed by Cohen. He responded to the WWHL host’s comments in an interview with Fox News. A rep for De Blasio told the outlet that Cohen’s incident is “Not the first time I’ve heard a drunk person complain about someone’s dance moves.” De Blasio has faced criticism with his handling of the coronavirus pandemic.

Andy Cohen and Anderson Cooperson went viral on social media. At the top of each hour, the co-hosts took a shot of tequila. Even some of Cooper’s reactions went viral on Twitter. The 52-year-old and 53-year-old friends celebrated each hour with a shot of alcohol as they counted to 2021.

His face is always gold pic.twitter.com/ODkUBSn7p0

But by the time 11 pm rolled around, neither Cohen nor Cooper looked like they could handle any more alcohol. The twosome thought it was going to be easier to down the shots of alcohol. But they kept the evening going with their commentary and games. Despite the strongness of the alcohol, they made it into the New Year.

What are your thoughts on Cohen’s comments about de Blasio? Sound off below.