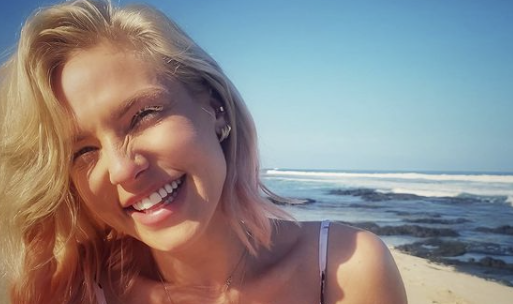 So the rumors were true — Brian Austin Green and Sharna Burgess are vacationing together. Fans spotted the pair at an airport on Christmas day. And from photos posted on social media, it appears they’re spending a lot of time together in a cozy Hawaiian resort. But it’s not just any vacation spot. It’s the same resort where Brian Austin Green married his ex, Megan Fox.

Us Weekly confirms it’s the Four Seasons Resort in Hualalai, Hawaii. Neither Brian nor Sharna tagged the resort in the photos, but fans were able to make the connection based on the photos. The property has a pretty distinct landscape.

“First vacation in a long time, best vacation in a lifetime. ♥️” Sharna captioned one photo, capturing one of the resort’s trees in the distance. “Sending you all love. Stay safe and stay healthy. 2021 let’s go.”

Sharna Burgess teased she’s in a new relationship, but she still hasn’t publically admitted to dating Brian. Perhaps that news will come soon since fans are catching on.

“I thought that when I met someone, I would be like scream it from the mountain tops,” the dancer told Us Weekly early in December. “And it’s actually, it’s almost the opposite. I want to hold it close to me for just as long as I can to stay in this space and just enjoy that human for as much as I can. … [This one] feels different to all the rest of them.”

Fans eagerly wait to hear more about her budding romance.

But What Do Fans Think About The Situation?

Some fans criticized Brian Austin Green for moving on so quickly after ending his marriage with Megan Fox. Sharna Burgess certainly isn’t the first person he dated after the split.

“What people normally do when they get out of [a relationship] is they date,” the actor said on the Hollywood Raw podcast back in the summer. “They talk to multiple people at once, some people use dating apps, they talk to multiple people, they go on multiple dates, they spend time with people until you feel a connection with someone then something builds from there. … When you start finding commonalities with someone, then it becomes something bigger. You have to be willing to get out there and put yourself out there.”

And his ex Megan Fox moved on too. She’s currently dating rapper Machine Gun Kelly. In this case, it really seems that everyone is looking forward to moving on to new, healthier relationships.

Do you like Brian and Sharna together, or do you think they would be better suited with other people? Let us know what you think in the comments.

When Is ‘Ultraman’ Season 2 Coming To Netflix?
Hallmark’s ‘Signed, Sealed, Delivered: The Vows We Have Made’ All Details
Michelle Duggar Straddles Jackalope, Flaunts Knee Caps In Shorts
‘Below Deck Med’: Bobby Reveals Season 2 Regret With Hannah
Jeremy And Jinger Vuolo Dragged For Using Daughters As ‘Props’