It came as a final blow to 2020 when Peter Weber announced his split from girlfriend Kelley Flanagan on New Year’s Eve. It was shocking and added to the growing list of Bachelor Nation splits throughout the horrible year. They were seemingly fine just a few weeks ago and planning their future together. So, what went wrong with Peter and Kelley’s relationship?

E!News Online shared details into what caused Peter and Kelley’s sudden split. The two were moving in together in New York and planning for the future. So what went wrong? Ultimately, a source says the move caused a lot of Peter and Kelley’s issues. Just December 22 they were still going strong and ready to make the big move.

But, it turned out to be too much for their nine month relationship. The source said, “Peter ultimately was the one who ended it with Kelley, but she 100 percent agreed that they needed time apart.” They continued, “They had been fighting a lot, and the move was very stressful and put a lot of pressure on them.”

The source went on to say Peter and Kelley spent the holidays apart. They also noted that Peter was already living back with his parents in Los Angeles.

Fans remain shocked by their split, especially since Kelley had the full approval of Peter’s mom, Barbara. She commented on Peter’s post announcing their split saying she supported them both. Peter’s post was heartfelt and said he will always have a special place in his heart for Kelley.

Even though things ended, he will continue to cherish the times they had together. 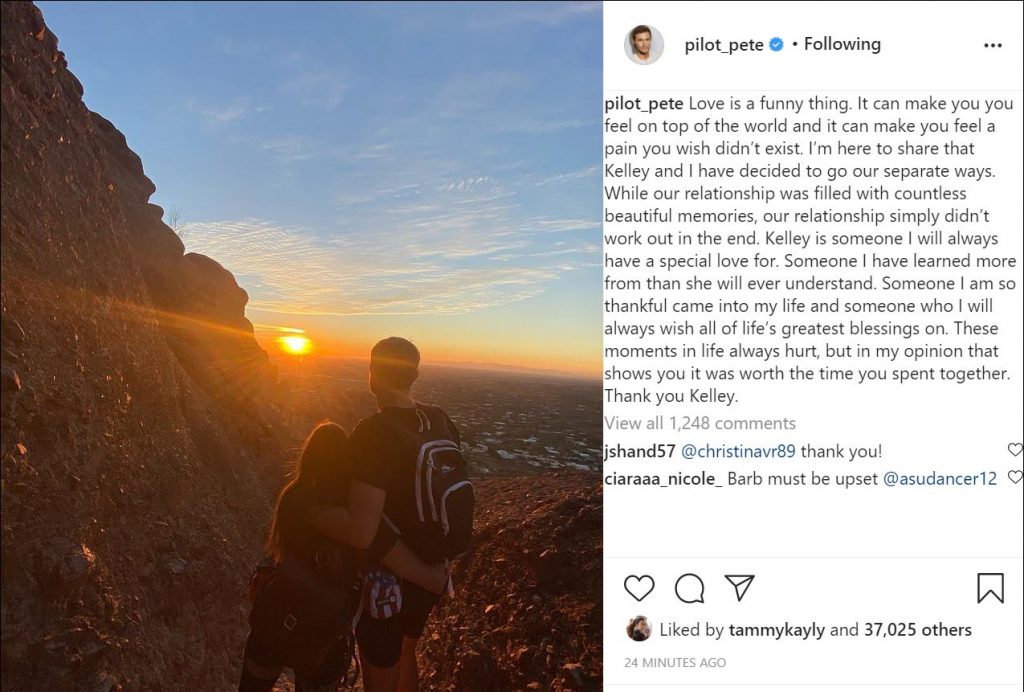 It’s been a turbulent 2020 for The Bachelor

Peter and Kelley aren’t the only ones to call it quits during 2020. And, it also wasn’t Peter’s first split either. Peter actually ended things with Hannah Ann Sluss and then also with Madison Prewett following his season.

But, he wasn’t the only one to experience relationship issues throughout the year. JP Rosenbaum and Ashely Hebert also called it quits this year announcing their divorce. Kendall Long and Joe Amabile broke up as well. Chris Soules and Victoria Fuller also took a chance on love but crashed and burned also.

The list goes on and on. There was also the very public breakup between Cassie Randolph and Colton Underwood. In fact, she filed a restraining order that she later dropped against the former Bachelor.

Hopefully 2021 will be a better year for Bachelor Nation. While there was a lot of heartache, there was also some successful love. Clare Crawley and Dale Moss got engaged, along with Tayshia Adams and Zac Clark. Both of those couples are still going strong.