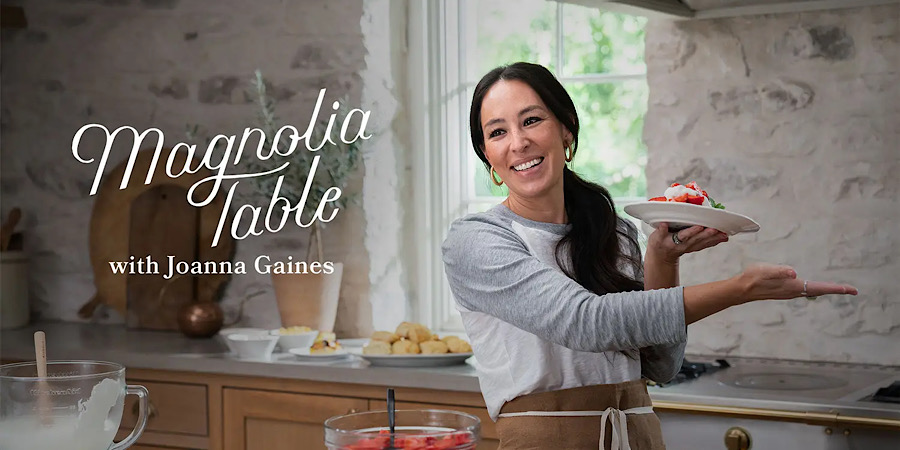 Joanna Gaines is cooking up some magic in the kitchen. And fans do not have to wait until its official January 4th Discovery Plus debut. A special treat is coming in advance and it won’t cost a cent.

Joanna Gaines Meets Discovery Plus For A Perfect Recipe

Joanna Gaines and husband, Chip Gaines spent several years on HGTV as the the Fixer Upper couple. Fans were drawn to Joanna’s designing ability. Eventually, the Gaines’ designs became available for purchase. They became the face of chic in Target stores everywhere. If you wanted to renovate your home, you went to their collection. They had more plans in the works but Covid interfered.  But, now the time has come for Joanna Gaines to spread her wings and fly as the chef she is.

After writing and publishing two cookbooks in two years, it would only make sense Joanna would have her own cooking show. The Magnolia Table will air January 4th on the new streaming service, Discovery Plus. It combines channels such as Lifetime, HGTV, TLC, OWN, and many more. Though the official launch of the Discovery Plus is January 4th, fans will not have to wait until then to watch Joanna cook in the kitchen!

If you are ready to learn new 2021 recipes, Joanna and Discovery Plus have you covered. On Sunday, January 3rd, two episodes of Magnolia Table will air at 8 and 830pm. This comes before the streaming service has even launched. Additionally, the two episodes will be free. Fans will also get treated to an inside look at her remodeled home and kitchen space, seen on her series. This will air an hour prior to Magnolia Table. Joanna’s advice to aspiring chefs is: “I think if your kitchen is not messy, you’re not having fun.” She shared these words in a preview for her new shows.

But, her cooking show is not the only series Joanna will be a part of for Discovery Plus. She and Chip are rebooting their hit series Fixer Upper, newly titled Fixer Upper: Welcome Home. It will be interesting to see if they will incorporate their Target line and how. Maybe do a mix of expensive with budget-friendly? To prepare for the Gaines’ take-over, you can pick up Joanna’s cookbook Magnolia Table: A Collection of Recipes for Gathering and volume two.

Discovery Plus is available for $4.99/month with ads and $6.99 sans ads and begins January 4th. But, you can catch the two-episode premiere of Magnolia Table a night early, January 3rd, for FREE. And do not miss the behind-the-scenes look at the Gaines’ home renovation right before. Have you signed up for Discovery Plus yet? Let us know in the comments!