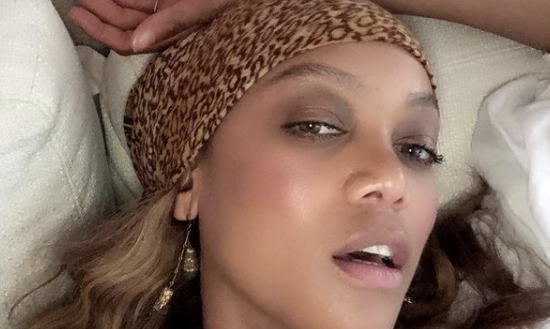 Dancing With The Stars fans felt very strongly about Tyra Banks’s involvement this year. Right now, there are plenty of rumors swirling that she’s trying to back out of the show before it comes back from Season 30. However, Gossip Cop investigated the rumors and didn’t find any truth to the rumors so far.

The rumors stemmed from a National Enquirer article that said tipsters told the publication that Tyra is ready to throw in the towel. They allegedly reported the hostess is sick of the cyberbullying and especially all the hate that stemmed from the elimination mix-up early on in Season 29.

If you aren’t familiar with what happened, the information Tyra Banks had on her queue cards didn’t match the information the control room was telling her through her earpiece. She accidentally announced Anne Heche and Keo Motsepe were safe when they were actually in danger. Ultimately, the judges ended up sending Anne and Keo home that night. Anne was reportedly so angry she stormed off the set and refused to do any press that night.

Many fans quickly put all the blame on Tyra, but executive producer Andrew Llinares even said she made the best out of a bad situation.

“I think Tyra dealt with it amazingly,” Llinares told ET at the time. “I just want to be really clear, this was not Tyra’s fault. It was a behind-the-scenes issue.”

As Gossip Cop points out, it really just seems like someone is just trying to stir the pot. As far as we all know, Tyra Banks will still host if Dancing With The Stars comes back for Season 30. Reports about her salary increase circulate around the web.

And this wouldn’t be the first time someone tried to stir up trouble with the new hostess, either.

Will The Drama Ever Stop?

A source told OK! that Tyra Banks didn’t want anyone from the Real Housewives franchise competing on future Dancing With The Stars seasons. And that really didn’t sit well with many fans.

However, Tyra quickly denied that she ever said such a thing. Instead, she said she believes someone is really out to get her.

“It’s just dumb rumors, and they are going to continue,” Tyra told ET. The rumors really seemed more vicious than ever this season.

“I don’t know what’s happening. I don’t even understand,” she continued. “You know what, there are some people out there who are just trying to stir stuff up.”

Whether DWTS fans love Tyra Banks or hate her, most can agree that some of the rumors out there are just insane. But what do you think? Will Tyra return for Season 30 or not? Leave your thoughts in the comments.