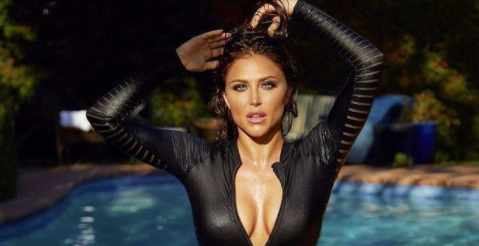 Dancing With The Stars pro Gleb Savchenko is going through a pretty high-profile divorce with his ex, Elena Samodanova. He recently began dating actress Cassie Scerbo and the two even vacationed in Mexico together. Throughout the whole ordeal, plenty of fans voiced their opinions. But Cassie isn’t interested in any negative comments. She recently sat down with Entertainment Tonight to talk about the whole experience.

Cassie Scerbo Doesn’t Care What The Haters Have To Say

At the end of the day, Cassie Scerbo feels that she doesn’t really care what strangers on the internet think about her.

After years in the limelight, she learned to develop a thick skin. But Cassie also wants to protect people who aren’t as tough yet.

“It’s important for us to be a voice for them,” Cassie continued. “Words do hurt, and they can be very destructive. When I was younger, I used to look at any type of negativity as my fuel pot. The more hate or negativity that was thrown at me, I was like, ‘This is just my fuel to go ahead and do more good, to love harder and to pursue my dreams that much more.'”

The Actress Hopes Boo2Bullying Can Put A Stop To It All

And that’s where the Boo2Bullying campaign comes in. Cassie Scerbo currently serves as the organization’s vice president, which seeks to end bullying and intolerance in all shapes and forms.

What’s the biggest problem you’re facing right now?
Here’s a great tool for problem solving created by @wholeheartedschoolcounseling
What are some ideas that you use to problem solve? Tag a friend. pic.twitter.com/b3q553D1cc

“My thoughts are as simple as this: Hurt people hurt people. When I see this trolling happening — I’ve seen it on my page, I’ve seen it on friends’ pages, I’ve seen it on strangers’ pages — it’s never something that you want to see,” Cassie discussed her motivation for getting involved with the project. “But in my eyes I’m like, ‘That person must be hurt.’ Like, what’s going on in their life that they feel the need to be destructive and critical and hurtful towards other people?”

Could she be thinking of someone specific here?

Gleb Savchenko’s ex-wife is pretty infamous for her Instagram tirades at this point. While Cassie and Gleb vacationed in Mexico, she hosted a few Instagram lives to bash her ex-husband and announce to fans how angry she was with him. In turn, Elena’s fans haven’t been very kind to Gleb and Cassie on social media. It’s possible Cassie could be describing Elena here.

Cassie Scerbo has yet to publicly comment on Elena’s Instagram videos. However, she did post an Instagram photo of her own captioned, “Happy girls are the prettiest 🤍🙏🏼✨.” Some fans believe this is Cassie’s way of clapping back at Elena. If Gleb and Cassie’s romance continues, there could be more public commentary down the road.

What do you think about the whole situation? Be sure to let us know in the comments. Follow TV Shows Ace on social media to keep up with stories like these. We always want to give you the latest information. Stay tuned for more!

What Is ‘Bachelorette’ Katie Thurston’s Net Worth?
Elizabeth Johnston Adds A New Member To Her Family: Meet Georgia
Mike Youngquist’s Uncle Beau Gets Brutally Honest, Natalie Is A Slob
Trent Johnston Whips Out His Blower To Spice Up Lunar Celebration
‘Siesta Key’ Season 4, Episode 5 Not On This Week & Here’s Why