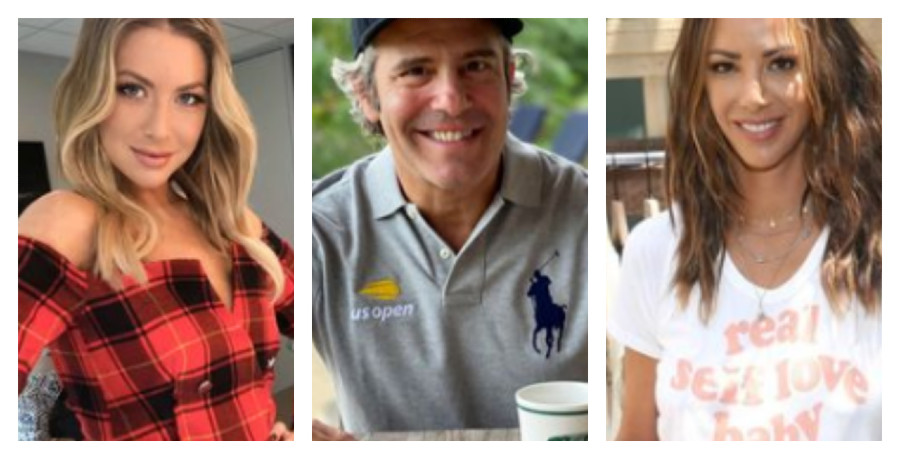 What a difference six months makes! Bravo exec and host extraordinaire Andy Cohen is reversing his earlier support of the network’s mass firings. Back in June, Bravo fired Vanderpump Rules stars Stassi Schroeder, Kristen Doute, and newbies Max Boyens and Brett Caprioni. All four of the reality stars were let go for their racially insensitive behavior. For Boyens and Caprioni, it was racist tweets. An old story about Schroeder and Doute calling the police on their Black co-star, Faith Stowers, came to light again in June. Due to the focus on racial injustices at the time, the story hit differently.

Some of Stassi Schroeder’s hardcore fans are still upset over her firing. Especially after her pregnancy announcement. However, there is rampant speculation that she will attempt a comeback in 2021 after her daughter is born.

In early December, long-time Pump Rules star Jax Taylor announced that he was leaving the show. His wife, Brittany Cartwright, also quit. However, fans think that the couple was really fired by Bravo but said they quit to save face. Jax has been under fire since June for his own racially insensitive behavior, as well as accusations of homophobia and transphobia.

How Did Andy Cohen React to Firings?

When Bravo initially fired Stassi Schroeder and Kristen Doute, they had the full support of Andy Cohen. Some fans held him responsible for the move, but he denied having any say in the matter. But still, he said he “absolutely” agreed with Bravo’s decision.

However, a few months later, he seemed to back off that statement. Cohen said that the behavior shown by Schroeder and Doute didn’t take away from their impact on the show.

When Jax Taylor announced his departure, Andy Cohen slathered Taylor in compliments about his time on the reality show.

And now Andy Cohen opens up even more about what he thinks Bravo should have done instead of firing cast members.

Andy Cohen had a big week. He co-hosted CNN’s New Year’s Eve coverage alongside BFF Anderson Cooper. The Bravo host also got a feature article in the New York Times. In the feature, Cohen discusses a wide range of topics, including All Things Bravo.

When asked about the firings, he tells the outlet that the network was short-sighted in firing the controversial Pump Rules stars. Instead, they should have let viewers “watch them find their way [instead of] just turning out the lights and forgetting [they] existed.”

But Cohen did admit that the firings were “decisions for that moment” of reckoning that was happening in June. However, he also feels that fans took their hunt for reckoning a bit too far, or “overcorrecting” by wanting more firings, such as Jax Taylor and RHOC’s Kelly Dodd.

The spotlight that was shining on racial injustices isn’t so bright six months later. It’s entirely possible that Bravo could resurrect Stassi Schroeder’s reality show career with her own spin-off. Jax Taylor has already teased his social media followers with a possible spin-off for him and Brittany Cartwright.

Andy Cohen addressed the controversial storyline from Season 8 of Pump Rules. When Taylor and Cartwright were planning their 2019 wedding, allegations came out that their chosen pastor was homophobic. In fact, the pastor’s previous social media posts came back to haunt him.

As fans saw on Season 8, Taylor and Cartwright tried to ignore the social media outrage until Lisa Vanderpump stepped in. The pastor was ultimately fired and Bravoholic/’NSYNC singer Lance Bass officiated the wedding. Pump Rules co-star Tom Sandoval called his friend out for ignoring the situation. Their friendship never recovered.

However, Andy Cohen wasn’t at all surprised that a pastor from Kentucky was homophobic. He said, “I’m not condoning homophobia. I’m saying it exists.” The NYT describes Cohen as “proud” of the network for showcasing different beliefs.

In fact, he gave his reaction to viewers calling for the cancellation of Bravo show Southern Charm. He said, “Why shouldn’t it be on? Do we want to cancel the South?”

It seems that Andy Cohen may not agree with the party line regarding the Vanderpump Rules firings. Are you surprised that the Bravo host is walking back his earlier support for the network’s decision? Let us know in the comments down below.

Bravo has yet to announce if Vanderpump Rules will return for another season.