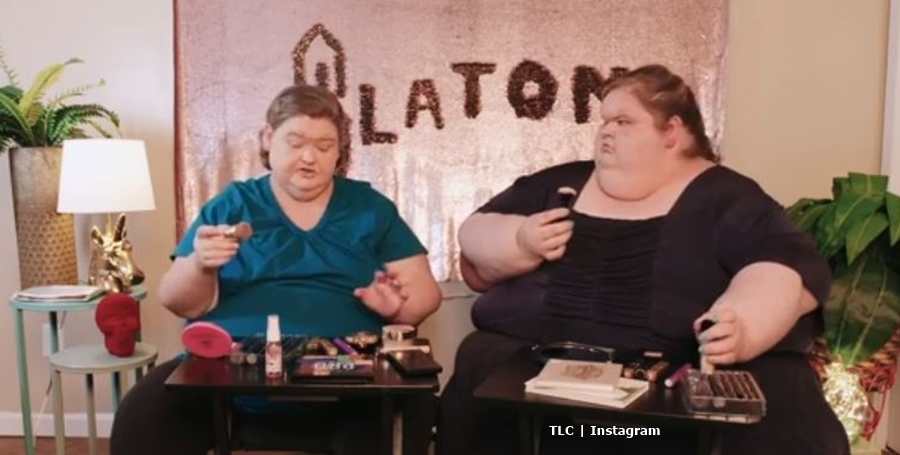 1000-LB Sisters Tammy & Amy did a makeup tutorial. Even though they move away from eating, some fans still stress a lot about them. Tammy, in particular, looks like she put on all the weight she lost in Season 1 of the show. Some critics think she should rather focus on her weight than the way her makeup looks.

TLC shared a clip of Tammy & Amy cooking soup and banana bread on Instagram and captioned it with, “Staying home for the holidays? Try out these Amy and Tammy approved keto recipes.” Well, the two women hope that their videos help other people who might face problems in their lives. The two try and remain cheerful and upbeat. But some fans just stress about Tammy. Even when they make it funny, many people just can’t laugh.  And, those critics don’t troll. They genuinely seem concerned.

1000 LB Sisters star Tammy put back all the weight she previously lost. And when she ended up with coronavirus. fans thought she might die at any time. Some followers of the show wonder if Tammy has any incentive to lose weight. After all, if she became skinny then that would mean no more TV fame. So, now that Tammy and Amy just put together a short clip for makeup tips, it didn’t really stop people from stressing about Tammy.

Working to change it up from eating and weight

TV Overmind reminds readers that “the sisters’ weight may be the focal point of the show, but they work on changing that.” Off the main TLC seasons, they share some clips that they hope inspire others. And a lot of fans seem delighted when they just banter with each other. So, while many people just stress about Tammy and her massive weight, a few others say nice things about their makeup tutorial.

1000 LB Sisters Tammy & Amy dropped their makeup tutorial this week. And Amy said that even if you feel cooped up at home it’s no reason to look terrible. So they ran through all the different types of foundation brushes at lipsticks adding their own comments. Well, some critics felt that they enjoy their fat fame. But others seemed encouraged that despite their size they make an effort to look and feel good.

Some very nice comments came in on TLC, Instagram. One fan said, “You are both so fun and beautiful! Hugs to a new year and new adventures!”

And another one noted, “I just love these two their attitude is everything ❤️❤️❤️.”

But several people pointed out that “attitude” isn’t everything. One very concerned fan wrote, “these two seem like genuinely nice people. I worry for their health of course and we all know that statistically speaking they won’t live long if they don’t lose weight and keep the weight off. They also have other chronic issues that need to be addressed.”

What are your thoughts on the cooking and makeup tutorials? Do you think that 1000 LB Sisters Tammy & Amy should rather focus 100 percent on weight loss before one of them passes away? Sound off in the comments below.